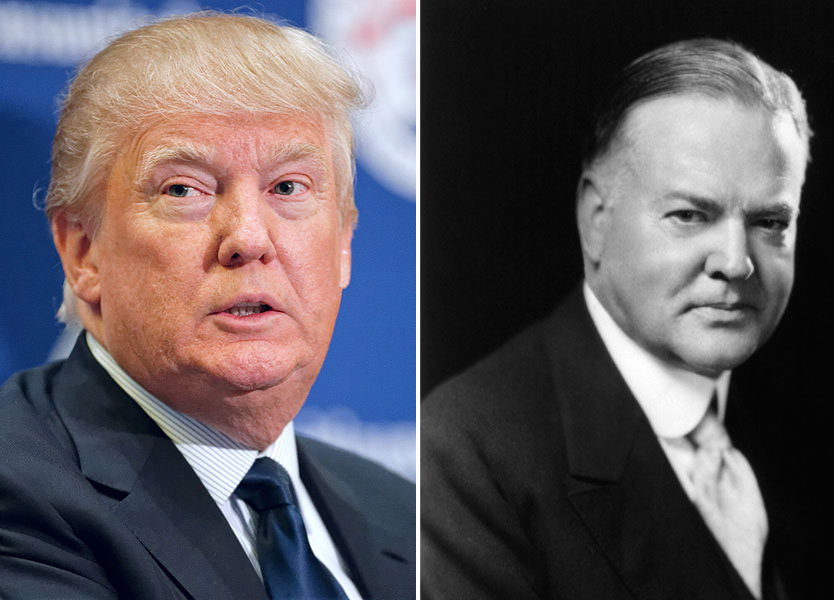 Special To The New Journal and Guide
The setting is the summer of a U.S. presidential election year. The nation is in the midst of a severe financial nadir with alarming unemployment and business closures, many of which will never return. During these tumultuous and uncertain times full of anxiety that I’m describing, the U.S. President compounds the tension by ordering military and police personnel to violently confront and remove peaceful protestors in Washington, D.C.

Many people would conclude that this paints a picture of incidents involving the current U.S. President, however, almost 90 years before President Trump engaged in one of the most controversial episodes of this summer, President Herbert Hoover participated in eerily similar summer-time circumstances, solidifying his political funeral.

On July 28, 1932, in the midst of the Great Depression, President Herbert Hoover ordered the active military and General Douglass MacArthur to expel protesting WWI veterans, who had gathered on the Mall of Washington, D.C. to redeem $1000 ‘bonus’ certificates issued to them in 1924.

Due to the ill-effects of unemployment and homelessness ignited by the Great Depression these heroes of the Great War refused to wait until the 1945 redemption date. Labeled the “Bonus Army”, as many as 15,000 of these veterans and supporters orchestrated the largest continual march on Washington up until that point in history. Hoover’s deployment of law enforcement officers and tank-supported active military personnel to forcibly remove the peaceful protesters resulted in numerous injuries and the deaths of two demonstrators.

Hoover received significant criticism throughout America as people became outraged that the President sanctioned violent confrontation on American war heroes. Hoover defended his actions by deliberately mislabeling the protestors as political subversives, a flagrantly false claim as 90% of the demonstrators were US veterans.

In an election year, and in the midst of the Great Depression, public opinion quickly turned against Hoover, driven especially by his treatment of these veterans who were exercising their 1st Amendment rights. Hoover proved unable to recover from this fiasco and lost his reelection bid. His treatment of the veterans has contributed to persisting negative assessments of his presidency.

Most subsequent Presidents have endeavored to be more cautious than Hoover in handling both the prospect and the reality of major public demonstrations. For example, President Franklin Roosevelt(FDR) capitulated to black labor leader A. Philip Randolph, who threatened to organize a publicized mass-march on Washington, D.C. in 1941, demanding the desegregation of the U.S. military and defense industries.

With the U.S. seemingly on the brink of entering WWII and championing itself as the beacon of liberty and democracy on the world stage, FDR could ill afford to confront the type of public demonstration staged by the Bonus Army in 1932. Consequently, FDR issued Executive Order 8802 in June 1941, which called for the desegregation of Federal Defense Industries.

The sagas involving Presidents Hoover and Roosevelt provide useful insights from which to assess the recent actions of the current president. In the midst of the current severe economic recession, President Trump’s “Bonus Army episode–part 1” occurred when he and Attorney General William Barr ordered the National Guard and law enforcement agencies to forcibly remove peaceful Washington D.C. protesters via flash bangs, pepper-smoke projectiles and rubber bullets, so that Trump could walk across the street and organize a staged photo-op in front of St. John’s Episcopal Church on June 1st.

Sources close to the President suggested he became enraged by reports from the previous day indicating that the Secret Service had rushed him into the White House bunker for safety as peaceful “Black Lives Matter” protests escalated in streets near the White House.

Soon after President Trump’s denial of residing in a bunker until demonstrations subsided, his Attorney General corroborated that he indeed was escorted to the bunker for his protection. As Twitter rang out with thousands of hashtags calling President Trump “#BunkerBoy”, his insecurity and ego overwhelmed any possible measured response to the protests. Instead, in a manner similar to Hoover, the impulse was to pit the military and police against peaceful protesters legitimately exercising their 1st Amendment rights.

As images surfaced of police using horses, shields and batons to beat back demonstrators as well as media correspondents, along with assaults using pepper ball projectiles and rubber bullets, President Trump taunted the peaceful demonstrators in a later tweet, claiming walking through those protesters was “a walk in the park”.

As he posed for a picture awkwardly holding the Bible, Trump obviously did not anticipate the wide range of criticism he would receive nor was he conscious of how his actions mirrored those of Herbert Hoover some 90 years earlier. The criticism of Trump’s military force against US citizens for his photo-op was harsh and vociferous, emanating every segment of our society, ranging from Episcopal church leaders, to people across the political spectrum, to current and former high-ranking military officials.

Indeed, the criticism from U.S. military leaders was most eye-opening. Current National Defense Secretary, Mark Esper, and current Chairman of the Joint Chiefs of Staff, General Mark A. Milley, both publicly expressed their regret for being a part of the photo-op, and also disavowed the military’s involvement in the ploy. Former military officials publicized their disapproval of the president’s misuse of active military on peaceful protesters as well, such as Martin E. Dempsey, Michael Mullen and Colin Powell, all former Chairmen of the Joint Chiefs of Staff. Jim Mattis, Trump’s first Defense Secretary, offered the most scathing public rebuke, concluding that Trump “intentionally divides the country and is a threat to American values and the Constitution,” further stating troops were ordered to, “…violate the Constitutional rights of their fellow citizens”. General John Kelly, President Trump’s former Chief of Staff supported Gen. Mattis’ assessment. Mattis further stated that President Trump was “…the first President in my lifetime who does not try to unite the American people” as nationwide protests have intensified over the murder of George Floyd.

Like Hoover, it appears that Trump may have underestimated the consequences of large-scale provocations resulting from his actions during the summer before a presidential election. Hoover underestimated how economic despair and outrage could magnify the import of other grievances like his self-induced 1st Amendment crisis involving protesting veterans. Similarly, Trump has failed to understand how the current pandemic-induced quarantine and economic crisis have led to mass anxiety, apprehension and widespread social tension.

Within this context, the publicized execution of George Floyd vividly documented systemic racism experienced by African Americans for the entire world to see, thereby lighting a powder keg of epic proportions. This horrendous event catalyzed thousands of large-scale protests throughout our nation and the world. In the wake of these developments, President Trump has proven incapable of behaviors that can promote healing, instead choosing to fan the flames of discord and hatred.

President Trump has seemingly stolen a page out of Hoover’s playbook by doubling-down and attempting to discredit the protesters. Hoover justified his actions, by claiming the protesters mainly consisted of anarchists and communists, although as noted previously, 90% of the demonstrators were actually WWI veterans and many of them were disabled.

Similarly, Trump refuses to affirm the multitude of peaceful protesters and their legitimate concerns about police brutality and racial injustice. Instead, channeling Hoover, he attempts to portray all protesters as opportunistic provocateurs who are only interested in provoking late night chaos. For political gain, he attempts to define all protestors as criminals, despite evidence to the contrary, and avoid the critical issues that sparked the protests.

On June 18th for example, protesters in Tulsa, OK expressed their issues with racial injustice in addition to their disdain for the timing of Trump’s campaign rally coming on the same weekend as Juneteenth, and located in the city where an entire black community was completely burned down and black residents were slaughtered 100 years ago.

Yet, President Trump responded to the potential for escalated protests by moving forward with his June 20th rally and tweeting beforehand, “Any protesters, anarchists, agitators, looters or lowlifes who are in Oklahoma please understand, you will not be treated like you have been in New York, Seattle, or Minneapolis. It will be a much different scene!”

These statements also display Trump’s lack of comprehension and compassion of the collective grieving and outrage of millions of African Americans and their allies sparked by the police execution of George Floyd and other racially motivated injustices.

Based on his taunting, threatening tweets, and his investment in divisiveness, I’m convinced there is more to come. I think it is reasonable to expect that Trump will engineer a 2nd or even 3rd Bonus Army-esque episode(s), aka self-induced 1st Amendment crises before the election.

One only needs to recall his dehumanizing weekly tweets to taunt and threaten protesters in an effort to throw gasoline and provoke further chaos, such as the tweet, “…when the looting starts, the shooting starts”, which echoed a previous phrase(verbatim) used by a racist Miami Police Chief in 1967. His May 30th tweet suggested that if any of the peaceful protests in front of the White House breached the fence, the Secret Service was ready to release “the most vicious dogs, and ominous weapons, I have ever seen”. On June 11th, Trump praised National Guard usage of tear gas and brute force in Minneapolis against protesters as a “knife cutting butter…”.

Two things seem clear and certain today. First, we will see more protests throughout this summer (and maybe in the fall), as African American protesters and their allies continue to pursue justice against police brutality and have also expanded the scope of their protests to target other pertinent structural and symbolic components of racial subjugation such as an inequitable criminal justice system, voter suppression, healthcare disparities, and Confederate monuments and statues. Another certainty is President Trump will insert himself to undermine this longest wave of Black protests since the 1960s, thus manufacturing 1st Amendment violations and personally stirring racial divide.

Summer 2020 is eerily similar to Summer 1932. Hoover’s laissez-faire approach to the Great Depression combined with sanctioned brutalization of peaceful protestors sealed his political fate in the Summer of 1932, four months before the election.

In Summer 2020, Donald Trump faces an even more explosive mix of challenges than Hoover, including a Pandemic, Economic Recession and a revitalized Civil Rights Movement, all just four months before the election. Will Trump suffer the same political fate as Hoover? The answer is Yes. The current president’s odds of re-election are dismal.

Healing our country’s wounds requires a leader who is able, like Roosevelt, to appreciate the importance of the moment and navigate the winds of change in ways that promote freedom and create opportunities for all citizens. 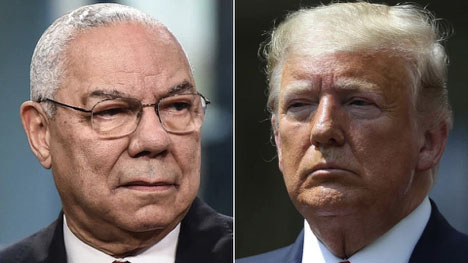