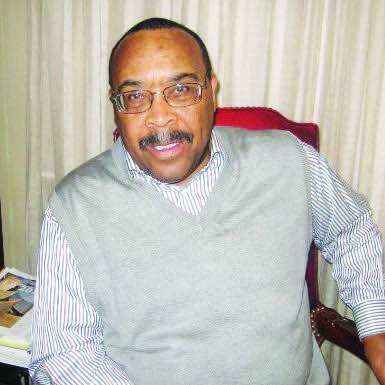 Earl Fraley, who was recently appointed chair of Omega Psi Phi Fraternity’s 100th Anniversary Committee for 2020 in Hampton Roads, was years from being born when three Howard University students launched the fraternity in 1911.

Still, Fraley has been a member of Omega Psi Phi Fraternity for 50 years, cherishes the fraternity, and enacts its founding principles: Manhood, scholarship, perseverance and uplift. So he can tell you a thing or two about the 106 birthday candles that Omega members are carefully poking into huge birthday cakes at more than 750 international, undergraduate, and graduate chapters

Instead of dwelling on Omega members who made history by fighting in World War I after they were the first soldiers of color to graduate from a military training camp in Iowa. Or focusing on well-known Omega member Carter G. Woodson, who helped to establish a scholarly center that helped to launch Black History Month in the early 1920’s. And instead of rattling off the names of famous Omegas like Count Basie, Langston Hughes, Morehouse President Benjamin Mayes, Politician Jesse Jackson, Entertainer Steve Harvey, and NBA great Micheal Jordan, Farley prefers to focus on how the fraternity has changed his life in Hampton Roads.

“All I heard growing up was Omega, Omega, Omega,” said Fraley who has held increasingly responsible positions in the public and private sector.

“I wanted to emulate those guys,” he added. “Many of those I hung out with in college at Virginia State University wanted to be Kappas but I stuck to my guns. We have a saying in Omega: ‘It is not something you are in. It is something in you.’ I had that notion as a young man.”

His sentiments helped to birth the frat house that the local members bought in Norfolk in 1992. This means Fraley’s life and the local community were changed by the fraternity that Edgar Amos Love, Oscar James Cooper, and Frank Coleman launched on the campus of Howard University in 1911.

“We bought the (frat) house in 1992,” Fraley said. “But our chapter since 1935 aspired to have its own house. So our past members paid dues each year. Some of the funds were earmarked for the purchase for property.”

Pointing to the Omega Psi Phi house in Norfolk that has hosted local conferences, entertainment events, and hosted scholarly endeavors, Fraley said, “I took it on myself to bring that vision to fruition. I don’t know the hours I put in but they were equal to the hours that other fraternity members who helped out, put in. What we were trying to do had never been done before. We were cutting new ground”.

Fraley added, “Now the idea has caught on with other Greek organizations as well. I’m most proud that it has also served as a community center. Other organizations have their meetings there and organizations, and individual receptions and programs. We’ve gotten a lot of support from those who use the facility. We host a male youth academy there.”

Since Omega’s motto is manhood, scholarship, perseverance and uplift, cardinal principles that all fraternity members share, it is not surprising that frat members have a history of supplying funds to multiple endeavors including the United Negro College Fund. For example in 1979, the Grand Conclave agreed to provide $250,000 for the next five years, according to the Omega Psi Phi website. The fraternity also contributed funds to Jesse Jackson’s Rainbow Coalition, and his 1984 and 1988 presidential bids.On November 16, 1975, an impressive granite monument was dedicated to the memory of four Omega founders.

Omega members are devoted to providing ongoing wisdom, support and solace, Fraley said, acknowledging that Omegas attend each other’s funerals and offer service to the deceased member’s family, while attired in dark suits and white gloves.

Fraley said, “Participating in a memorial service for an Omega is a time-honored service. We try to send him off and let the world know how much he was loved and appreciated. You make your funeral while you are living.”

Some assume the fraternity is an organization that sponsors parties and bequeaths social status, but it so much more. It is also a training ground for leaders.”Let’s say you are a recent college graduate affiliated with our chapter and you became a committee chair,” Fraley said. “We will listen to your report, accept your report, provide feedback, and privately coach you. The leadership skills you gather with us are readily transferable.”

Reflecting on his 50-year tenure as an Omega, Fraley said, “Being an Omega has taught me how to be a team player. We are in an environment where at least everybody is a college grad. So we have to demonstrate we are worthy of a leadership role. Some of our best leaders were once our best followers. We learn how to accept responsibility.”

In short, Omegas cling to their founding principles, a century after they were founded. Omega members nationwide not only host events for youth throughout the year, but pass out public service awards to local leaders each year, host ongoing scholarly events, and raise funds for educational, community, and charitable causes.

“To this date, there are very few Americans whose lives have not been touched by a member of the Omega Psi Phi Fraternity,” the fraternity’s website noted.