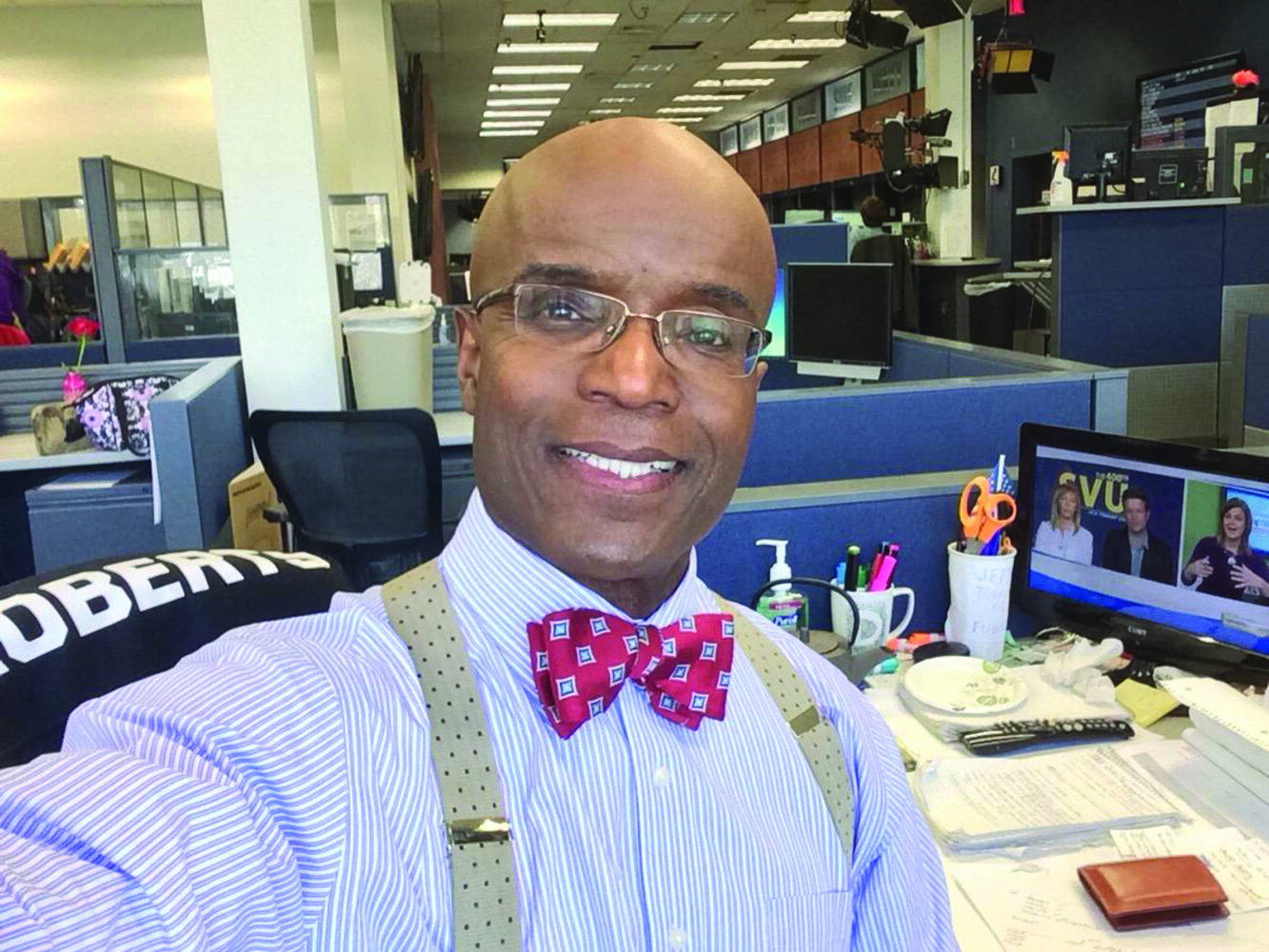 My broadcast career began in high school. I was a big fan of local radio and tv in Baltimore. A high school teacher suggested I study communications in college.

Mom and pop warned me funds were tight – with six kids and two ahead of me already in college.

So I had to come up with a plan. The Urban League helped.

I saw one of their tear-off pads, in a hall, promoting scholarships for students interested in broadcasting.

I filled it out, sent it in with an essay, convinced the interviewers of my hunger to “tell stories on the radio and in TV” and, BAM!

I got a two year scholarship to the Community College of Baltimore (CCB)! Everything paid for, including pencils!

I got my first experience on air at the CCB’s radio station, Saturday nights, midnight to 4 a.m. Sunday, during my second year 1975-76. (Loved it!!)

It was based, somewhat on what I listened to, long distance, on WHUR-FM, Washington, D.C.

With graduation looming in the spring on 76, I was determined to land a “professional” job on “commercial” radio by August 26th, 1976.

That’s my birthday. Plus, I needed the money to pay for my third year of college at Towson University!

I began a letter writing campaign to the general manager of WHUR, Cathy Liggins (now Cathy Hughes, of TV ONE). After the second letter, she called me and invited me to visit their DC studios in early June, after I graduated CCB.

My interview was with the program director, Anthony Carlton. I came prepared with a five-minute audition tape of some of my air work at WBJC.

Mr. Carlton listened for about 30 seconds of it, stopped the tape and told me I had the first job opening, anticipated in July.

Hello, WHUR, a full month before my goal of August 26th!

I commuted from Baltimore, by Greyhound and Trailways busses. One semester, I purposely signed up for an 8 a.m. class at Towson – knowing it would be a challenge.

I’d get out the door of WHUR’s Howard University campus at roughly 5:30 a.m. catch the local bus, downtown where’d I’d get a Trailways at 6 a.m. to Baltimore.

While at WHUR, Cathy Liggins and then, weekend evening host Melvin Lindsey, started the Quiet Storm. The format was basically R&B oldies – against EVERYONE ELSE’S DISCO and FUNK.

Adult radio listeners ate it up. Melvin got tired of it after a year, quit, and took a job at rival station WKYS. I took over the Quiet Storm in ‘77, when it was only on weekends.

Our weekend evening ratings were in the 20’s! Comparably, other radio stations were content to draw single digits. Cathy Liggins-Hughes realized WHUR had something special.

She brought Melvin back to host Quiet Storm during the weekdays while I continued weekends, and finished COLLEGE.

And that was fine with me. I began to realize I wanted to do more than music.

I started volunteering in WHUR’s News department. I left WHUR in the spring of ‘79, to take a summer fill-in job at a top Baltimore News Radio station, WCBM.

The experience was like … WHUR taught me to swim; now, WCBM wanted me to swim marathons for time.

I hung with them for the summer, filling in for their regular radio news anchors.

But, one Sunday morning, I was running late and crashed the car my father let me use. The car was totaled. I was not hurt. I missed the first two newscasts at the radio station and the boss fired me.

I was hurt. I broke up with a girlfriend shortly after that. Two strikes. I was determined to be ready for the next pitch. I got busy, and sent out about 30 resumes and audition tapes.

Dick Lamb at 2WD (WWDE-FM) radio here in Hampton, offered me a job in September of 1979. I was ecstatic! 2WD was a fantastic experience reporting local radio news. But, I was still hungry.

After about a year and a half, I was hungry for the next step, TV. Ava Hurdle, helped me get an interview for an opening at WAVY TV.

I had to learn how to tell a story for TV News, while using FILM. We later upgraded to video tape. It was at WAVY that we underwent dramatic changes to upgrade our style. We hired Dianna Morgan and Don Slater while I was there.

After about a year, WTAR TV 3, now WTKR offered me a job as a reporter. I worked for five years at Channel 3 before literally burning out.

I’d applied for an anchor position on their new noon news program but the job was given to a guy who had not reported or anchored before.

That was it for me.

I quit … and without a safety net. I thought I’d had a bite on a job back in D.C., but that didn’t pan out.

About six weeks later, I took a position with a start-up radio TRAFFIC reporting service “Metro Traffic.” In addition, Chester Benton of WRAP-AM hired me to do morning news and produce commercials.

The two were just enough to make ends meet with my wife and 3 children.

In the spring of 1989, WAVY TV hired me to host their brand new, half hour, morning news show. In addition to anchoring, I would be a news reporter, running the streets.

WAVY kept expanding the morning show to, now, four and a half hours. Plus, I became the Noon news co-anchor.

One of the biggest, and best, experiences during all this time had been my reports called “Wednesday’s Child.”

Between 1990 and 2010, I’d estimate I’ve featured hundreds of children who were in the foster care system instead of adoption, or in single-parent homes and hoping for mentors.

My job was to entice volunteers to step up and mentor, or adopt.

What a gratifying experience.

I’ve been honored to win a few awards for my reporting:
An associated press award for a half hour special on AIDS; an Emmy nomination for best morning show; Coastal Virginia Magazine’s “Best of Readers’ Choice awards for best TV news anchor.
For them I am grateful, but most rewarding is when someone says to me: “I wake up with you, every day.”

Today I am called the “Marathon Man.” I co-anchor 51/2 hours of news a day, first as co-host of the number-one rated morning newscast in Hampton Roads: WAVY News 10 Today and WAVY News 10 Midday.

I am also an author. In 1993 my book “Rap To Live By” was a collection of positive poetry and rap songs for kids of all ages.

I now live with my family in Newport News.

By Don Roberts
Special to the Guide