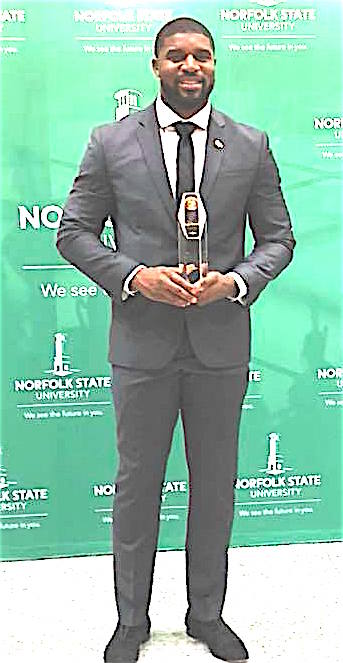 NSU’s Graduate of the Last Decade Award recently bestowed on him.

On July 18 when the first-year players hired by the Jacksonville Jaguars report to the team’s pre-season camp, safety Don Carey of Hampton Roads will be venturing to his tenth.

Carey, who lives in Chesapeake, and other new NFL veterans will be arriving with the rookies who are freshly drafted out of college to compete for the wealth and glory on Sunday afternoon, and Sunday, Monday and Thursday nights before thousands watching from the stands or on TV.

This is not Carey’s first tour of duty in Jacksonville. He was a rookie safety for the Jaguars in 2008, before moving to the Detroit Lions in 2011.

When he started his career, many of the Jag’s rookies he will report to camp with were still in elementary school.

But before he prepares to venture into another grueling several weeks of preparing for the 2018 season, Carey has been devoting a lot of time in Hampton Roads.

Carey is a graduate of Booker T. Washington High School in Norfolk and NSU Varsity football and sees himself investing into the community which helped build his character and sense of purpose.

He did this in Detroit where as he was honing his football skills, he began developing his resume as a motivational speaker, philanthropist and author.

The highlight of that investment in the Hampton Roads community and notably in the area’s youth is the 2018 Don Carey REECH Foundation Youth Football Camp- Norfolk on Sat, June 16, 2018. It will be held from 9 a.m. to 2 p.m. for hundreds of area youth (6-17) at NSU’s Dick Price Stadium.

The one-day camp will introduce youth to the fundamentals of football in an energetic environment.

Certified clinicians will use a series of drills to show passing, catching and running skills in a non-contact setting.

REECH is an acronym for Carey’s non-profit organization, “Reaching, Educating, and Empowering Children”, particularly in the areas of science, technology, engineering and math. It is the brainchild of Don Carey and his wife Lakeisha Carey. The couple and their children reside in Chesapeake.

REECH is designed, according to Carey, to impact inner-city youth by expanding their horizons to new opportunities they may not have known existed. It provides youth with tools to secure opportunity of

academic achievement and exposure to diverse arenas they can ultimately be inspired in order to reach their maximum potential and become significant contributors to society.

How he cultivated his civic mindset to invest in cultivating youth interested in STEM (Science, Technology, Engineering, Mathemathics), giving back to his community and his view on his life is spelled out his a book he recently penned, “It’s Not Because I Am Better than You.”

Carey received his Bachelors Degree in Building Construction Technology from Norfolk State University. He is also seeking a degree in Divinity now. But before he entered the NFL, he recalls it was working in the private sector applying his skills in a well paying gig in construction development that he acquired a deeper appreciation of STEM.

Using his skills as an orator, Carey has evolved into a viable motivational speaker while promoting his cause and book. He has spoken at events at his alma mater during Spartan Week, a luncheon at the

Chesapeake Men for Progress, and a youth conference of the Ground Zero Development as recently as May 19.

“My story is that of a child, raised by a single parent, enrolled in an urban school, and attending an HBCU and overcoming many challenges,” said Carey, who said he wanted his life to be an example

of an individual who overcame obstacles which have restricted the attainments of those less determined.

Recently while six NSU graduates received the 2018 Distinguished Alumni Award, Carey had the Graduate of the Last Decade Award bestowed on him.

Upon entering the NFL, Carey admits he had the speed, but not the biggest nor most talented defensive back arriving at his first training camp with the Jaguars.

“But I knew I could outwork the others and was “teachable enough” to acquire the other skills needed to be in an NFL defensive back field,” he told the GUIDE recently.

In football language, the defensive back field line must stop the offense from scoring. The best athletes are the Corner Back, where they and the safeties are the last barrier to keep the ball from moving and the opponents from scoring.

According to Carey, he has developed his skills as a safety who must be prepared, intelligent, vigilant and fast. On average the wear and tear on a safety grants them four years of effective service. Carey has lasted a decade.

In the early days of his career he worked with a literacy program where he was collecting books and distributing them to youth.

Last year, Carey and his wife LaKeisha, who is an NSU Criminal Justice Studies Graduate, launched a scholarship for Northwestern University students seeking a degree in criminal justice.

In 2016, he was nominated as Detroit Lions’ Walter Payton Man of the Year for his commitment to community service. The Detroit Lions Alumni

Foundation awarded him again for his continued dedication to serving his community in 2017.

Carey said he hopes to continue his work “giving back to the Hampton Roads community” and in Jacksonville in the coming years, even after his career in NFL is over.

Carey says he looks forward to the upcoming season with the Jags, who racked up a 10-6 record, won the AFC South Division, but failed to get past the Patriots in the Conference Champion for a trip to the Super Bowl.

Carey said the AFC South, the home of the Titans, Colts and Texans, will be highly competitive. The 10-year vet said he will lend his experience and leadership to help the team and himself reached their first Super Bowl in 2019.