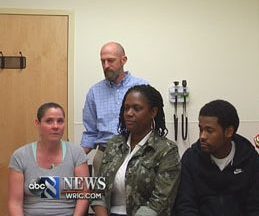 After undergoing a kidney transplant operation on March 21 at the Virginia Commonwealth University Hume-Lee Transplant Center, Djuna Paige is bouncing back at her home in Hampton Roads. So is her husband JP Paige. It’s important to stress that both are bouncing back because both underwent kidney surgery. But this does not mean that Djuna Paige received a kidney from her husband, JP Paige, who was more than willing to give his wife one of his kidneys; but it was not a match. Instead, his wife Djuna Paige received a kidney from a good Samaritan, Tracey Ridpath, who decided to become an organ donor after her friend, Roger Green, died from cancer in October 2015 in Colonial Heights, according to WAVY-TV.

In the process, JP became a kidney donor to benefit the life of another person for whom he was a match. “I have Lupus, and so Lupus had attacked my kidneys and caused them to fail,” Djuna Paige said in a WAVY-TV interview on April 28. She was diagnosed with Lupus about 12 years ago. About six years later, her kidneys began to fail. “Now, it is going good,” Djuna Paige said in a recent phone interview with the New Journal and Guide following her surgery at VCU on March 21. “I had to do two processes where the staples and stents were removed a few weeks ago. Now I am doing blood work and my medications are being monitored.”

If it all sounds slightly confusing, here’s why. The kidney swap program is relatively new. Thanks to sophisticated software that creates a kidney-transplant chain plus old-fashioned selflessness, the innovative kidney swap program helped physicians perform 544 kidney transplant operations nationwide in 2014, according to news reports. While 4,270 people died nationwide waiting for a kidney donor in 2014, according to The New York Times, the Virginia Commonwealth University Hume-Lee Transplant Center performs more than 100 kidney transplants each year, based on organ availability. According to its website, the VCU center was launched in 1962. It has performed close to 3,000 kidney transplants since it opened.

Recently, all of the donors and recipients in this kidney swap gathered back at VCU Medical Center for the first time together since their surgeries. It was a chance to celebrate Tracy’s kidney inside of Djuna and JP’s kidney inside of 25-year old Teshawn Woolridge, who had been waiting for a kidney for five years— all working and healthy.Life was challenging before Djuna Paige received good news about the Good Samaritan. She had been waiting months for a transplant. Typically, she went to dialysis three days a week for about four hours each day.

“It was a like a job,” Djuna Paige said. “I hated going. Somedays I didn’t feel well after dialysis, so I had to go home and rest. Often I had doctor’s appointments on the days I was not on dialysis.” Altruism has kept her going. “My husband and other family members have sustained me,” she explained. “Having Lupus changed our lifestyle. We used to take trips. The year I was diagnosed I bought my husband a trip to Dubai, but my kidneys were still working then.”

The experience has brought out the best in her and others, she said. “I believe God has a way of preparing you for everything you need to deal with. The early part of it was very tough. Few healthy people walk around thinking one day I may be on dialysis.” Her husband, JP Paige said, “My focus has become making sure that she is OK and spiritually well. I let her know I am not going anywhere. She is such a strong woman. I remember when she put her shoulders up, strutted to the door, and began to drive herself to dialysis. She has made friends there.”

While she never anticipated receiving a Lupus diagnosis, it has made her resilient. “My outlook is more optimistic now,” she said. “I see life from a different point of view. I don’t try to plan everything all out anymore.” JP, her husband, said the experience has made him more optimistic and resilient, as well. “The other day I heard from the man I donated the kidney to. He said he was going back to work for the first time. It made me feel great because I am a 45-year-old man. And my kidney went to a 25-year-old man. This has definitely impacted my perspective.”