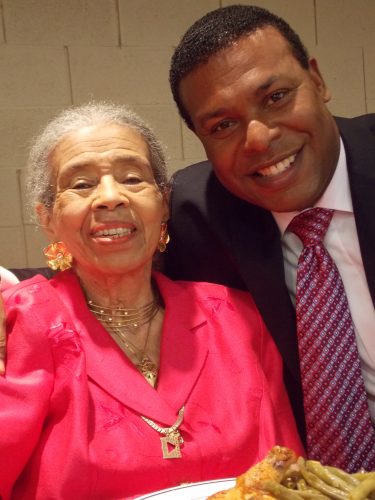 Corinne Davis Jones was like nothing Norfolk had ever seen before. She was the wife of Hilary Jones Jr., the first African American member of the Norfolk School Board, and the mother of three amazing sons. Corinne passed away on July 15 at a local hospital. A writer once described Corinne as “lightning in a bottle” and she was that and so much more.

Her funeral service was held at Grace Episcopal Church (Brambleton Avenue) on July 20 at noon. The Metropolitan Funeral Home (Granby Street) was in charge of the arrangements. Corinne would have been proud.

Known as Mother Jones throughout the state, Corinne had Mother Jones and a sprig of red roses embroidered in the lining of her casket. The visitation on Thursday night was filled with her friends and admirers. Parking and seats were scarce.

From the General Assembly, Daun Hester was there. Martin Thomas Jr., Norfolk’s vice mayor, was there visiting his good friend and Corinne’s grandson Jay Jones.

Photographs of Mother Jones with noted others including Senator Warner flashed across the screen at the Metropolitan. Rather than a wake, it was a celebration of Corinne’s well lived life and the countless friendships she had made.

Parking was also at a premium the next day for the funeral, but former Norfolk Mayor Paul Fraim and current Congressman Bobby Scott were there. Peter Decker III attended and Daun Hester was there again. Hester taught with Corinne at Norview Middle School. Dr. Alveta Green saluted Corinne, a former science and math teacher, again and this time her mother the former city councilwoman was by her side.

Less than two years before, Corinne’s three sons–Hilary the III, Jerrauld and Darryl– hosted a celebration of her 90th birthday. Corinne spent a lifetime mothering them and so many others. With a smile that lit up the room she described the affair as “one of life’s mountaintop moments.”

Mother Jones celebrated her 90th birthday in the hall at Grace Episcopal Church named in honor of her late husband Hilary Jones Jr. The hall was packed with family, friends, Virginia State alumni and other admirers including Norfolk’s current mayor Kenneth Cooper Alexander.

When Alexander was elected, Mother Jones told her son Jerrauld, a Circuit Court judge, “I’m so grateful I lived long enough to vote for a Black mayor.” Mother Jones insisted on going to the polls in person to vote in that election.

If she was grateful to vote for a Black mayor, she was overjoyed when her grandson Jay won a seat in the General Assembly. She said, “This completes the circle.”

Born Corinne Amelia Davis, Mother Jones was the daughter of Boston businessman Bertie Whitley Davis and his wife Corinne Wilson Davis. Corinne’s father was a 1917 graduate of Harvard. W. E. B. DuBois was a close family friend and a frequent visitor in the Davis home.

DuBois was not the only associate she knew with a national reputation. She met Martin Luther King Jr. at a picnic on Norfolk’s Anna Street and was good friends with local Civil Rights legend Dr. Hugo Owens. She introduced this writer to Dr. Henry Louis Gates at an Old Dominion University dinner.

Booker T. Washington High School legend Celestyne Diggs Porter, a longtime dear friend of Corinne’s, often cautioned, “If you’re standing on the wrong side of right, she’s a buzz saw you might not want to walk into.”

Her sons used a family mantra to explain their success—“Everybody doesn’t have Corinne Jones for a mother.” Another saying the family lived by was “there’s never an excuse for poor manners.”

No doubt about it, she was a real dynamo. But it was never about her, it was always about helping others. She graduated from Virginia State before she was 20 and started her teaching career in Boston.

Corinne brought that Boston style, determination and grace to Virginia. What impressed so many about her was how she remained “ladylike” in everything she did. She always conveyed the importance of good manners, respect and social grace. And she passed those traits to her close family and many friends.

At her 90th birthday party, Father Green, a former vice mayor of Norfolk and an Episcopal priest, said with a smile, “Corinne likes to brag—as a mother she has every right to brag.” Corinne was the matriarch of Norfolk’s accomplished Jones family. No one had engineered more local roadways than Mother Jones. She quietly leveled mountains, bridged canyons and brought people together.

Under her direction, in 1961, Hilary III and Jerrauld integrated Ingleside Elementary School. In 1968, Jerrauld integrated Virginia Episcopal School. He later graduated from Princeton with honors, Washington and Lee Law School and clerked at the Virginia Supreme Court.

In 1969. Hilary III, known as Buzzy to family and friends, was the first African American graduate of Lake Taylor High School. As for Darryl, he is also a Hampton graduate and the family’s top musician and political analyst. All three of her sons were totally dedicated to their mother

If you wanted to see sparks of joy flash from her kind brown eyes, all you had to do was mention her late husband or their three sons. If you spoke of her three grandchildren or four great grandchildren, you’d see a meteor shower. At her grandson Jay’s election to the General Assembly, it was a super nova.

Corinne had a zest for life and knowledge. Success was always expected. It was a life filled with kindness and purpose—she was both a pioneer and an inspiration. Mother Jones will be greatly missed.

By Gary Ruegsegger
Special To the New Journal and Guide