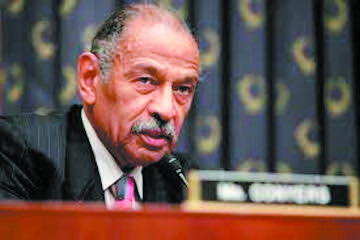 Many African-Americans are concerned about the sexual assault allegations that have been leveled against several high-profile men, including Congressman John Conyers who resigned on Tuesday after about 200 people attended a Detroit rally that was held in his honor, and hip-hop mogul Russell Simmons, who recently stepped down from all his business interests.

However, some are not sure how to respond because sexual predators have often languished in the shadows in many communities of color. Typically, they were dismissed or ignored. While sexual abuse allegations against Hollywood producer Harvey Weinstein launched a steady stream of protests and Twitter posts from a largely white audience after The New York Times released an Oct. 5 report that detailed “decades” worth of harassment allegations against Weinstein.

On Dec. 4, dozens of political, religious, and civil rights leaders gathered at a rally in Detroit at the Hartford Memorial Baptist Church to support Conyers, the embattled 88-year-old Congressman, who was first elected to office in 1964. His three accusers include Deanna Maher, who ran Conyers’ Detroit field office from 1997 until 2005, when she was in her 50s. A second accuser, Maria Reddick filed a lawsuit against Conyers earlier this year alleging numerous instances of sexual harassment but later dropped her legal action. The third accuser is an unnamed former staffer who settled a $27,000 sexual harassment claim with him in 2015, paid for from a congressional account normally used to cover office expenses, according to news reports.

Before the rally was held for Conyers in Detroit, State Rep. Sherry Gay-Dagnogo, D-Detroit said in The Detroit Free Press. “We know the balance of the work and contributions that Congressman Conyers has made. He’s certainly someone who has championed civil rights and he deserves due process.”

The recent rally for Conyers attracted more than 200 people including some of Detroit’s most influential leaders, including the Rev. Charles Adams of the Hartford Memorial Baptist Church, where the recent rally was held, NAACP Detroit chapter President Rev. Wendell Anthony, as well as several members of the Wayne County Commission and the state House of Representatives.

Anthony, president of the Detroit chapter of the NAACP, said Conyers should receive due process. “Why is it that John Conyers is the only individual to be denied due process?” Anthony asked at the rally. “It is apparent that if we’re going to raise this unholy and unlawful guillotine, calling for the head of John Conyers, then in fairness we must begin with the president of the United States. Mr. Trump currently has 15 women who have accused him of sexual harassment. He has told the world and embarrassed the nation by telling how he treats women.”

Conyers’ troubling situation has also attracted critics. Several lawmakers called on him to resign including a group of Democrats in Congress, members of the Congressional Black Caucus. Recently, House Minority Leader Nancy Pelosi of California said Conyers should step down. Her comments were echoed by House Speaker Paul Ryan who said Conyers should “resign immediately.”

“I pray for Congressman Conyers and his family and wish them well,” Pelosi said at a news conference. “However, Congressman Conyers should resign,” Pelosi added in a Nov. 30 statement in The Washington Post. “Zero tolerance means consequences for everyone. No matter how great the legacy, it is no license to harass or discriminate. In fact, it makes it even more disappointing.”

This is the point. Conyers’ recent rally in his hometown came on the heels of a troubling chain of events in Washington, D.C. After three women accused him of sexual assault, on Nov. 25, Conyers stepped down as a ranking member of the House Judiciary Committee. A few days later on Nov. 29, Conyers was hospitalized for stress related issues. Conyers, who was first elected in 1964, said at first he would not resign, but did this week.

In Norfolk, Dr. Carol Pretlow, an associate professor at Norfolk State University, said this is not a new issue in communities of color. Still, it is complicated.

“I always try to be objective but it is difficult because this is an emotional issue,” Pretlow said. “I have not experienced sexual harassment but I have experienced being raped. I was a graduate student on my way home from the library one night after class when I was raped.”

Pretlow said, “The response was mixed. Norfolk State was very supportive. I think that in part is why my commitment to Norfolk State has always been great. They have always had my back. But others, mostly my relatives, told me not to talk about it too much (because it could damage the university’s reputation).”

Pretlow said some relatives even tried to blame her for being raped. “Some told me I should not have been out that late at night. They were blaming me, the victim,” she added, laughing. “On a personal level, my father used to tell me that I had seven minutes to grieve about anything. After that, I should hit the ground moving. So after the rape, I told myself, ‘Keep it moving.’ Because of that experience I understand the emotional part of this.”

Pretlow said she tries to be objective and urges other women to do likewise. “Let us hear each side of the story and be supportive of each other. Let us look at our community and see what we need to do collectively.”

In a sense, that is what happened next. Pretlow said a handful of men came out of thin air and volunteered to escort her to class at night. Another man told her to phone him before she left class at night. Another man followed her one night, crossed the street when she crossed, and when they both breathlessly reached the guard station, “He said I am trying to protect you but every time I get close, you run away. I told him, ‘I was sorry.’ He said he rode the light rail too. He gave me his number and said he would meet me at my office and walk with me at night.”

Blacks, in other words, may avoid talking publicly about sexual assault, especially when it comes to high-profile men like Conyers and Simmons because many say the cost is too high.
For example, Simmons, the co-founder of Def Jam, recently announced plans to step down from his various businesses after allegations of sexual assault were leveled by two women including writer Jenny Lumet, the daughter of director Sidney Lumet and the granddaughter of singer/activist Lena Horne. Lumet said Simmons raped her in 1991. Another one of Simmons’ assault victims, model Keri Claussen Khalighi said she was 17 when Simmons sexually assaulted her.

The point is the cost that both Conyers and Simmons are already paying is coming sharply into focus. Simmons, a hip-hop mogul has a net worth that was estimated at $340 million in 2011. In addition to co-founding Def Jam Recordings, Simmons created the clothing fashion lines Phat Farm, Argyleculture, and Tantris. He also contributes to the Huffington Post and is editor-in-chief of GlobalGrind.com, a website that creates reviews in the world of hip-hop.

Simmons’ tab increased on Dec. 4. J.C. Penney Co. announced it would end its association with Simmons and pulled his clothing line, according to recent news reports.
The department store chain ended its association with Simmons after just over a year of offering the apparel line in about 80 of its 875 locations, the company said in a statement, according to Yahoo! Finance.

“The company decided to discontinue selling Argyleculture in light of the recent allegations,” the Penney spokesperson said in a statement. The move came a few days after Simmons announced he was stepping down from several of the companies he helmed.

In Norfolk, Pretlow acknowledged that communities of color often have a tradition of ignoring or whispering about high-profile men who commit sexual assault. Don’t air your dirty laundry in public sums up the tradition.

“That tradition was a part of us being discriminated again,” Pretlow explained. “We did not want to give anyone any further reason to discriminate against us. So we always thought, ‘Let’s keep it quiet,’ “ Pretlow added, pointing to a case in point.

Christina Coleman, news and culture editor for Essence magazine, said in a recent article titled, “Do We Respond Different When Black Men Are Involved? “I think it’s a cultural thing. Black people are taught at a really young age that we shouldn’t snitch, nobody wants to be a snitch,” Coleman said. “The other part is always protecting Black men. We saw that with Cosby.”