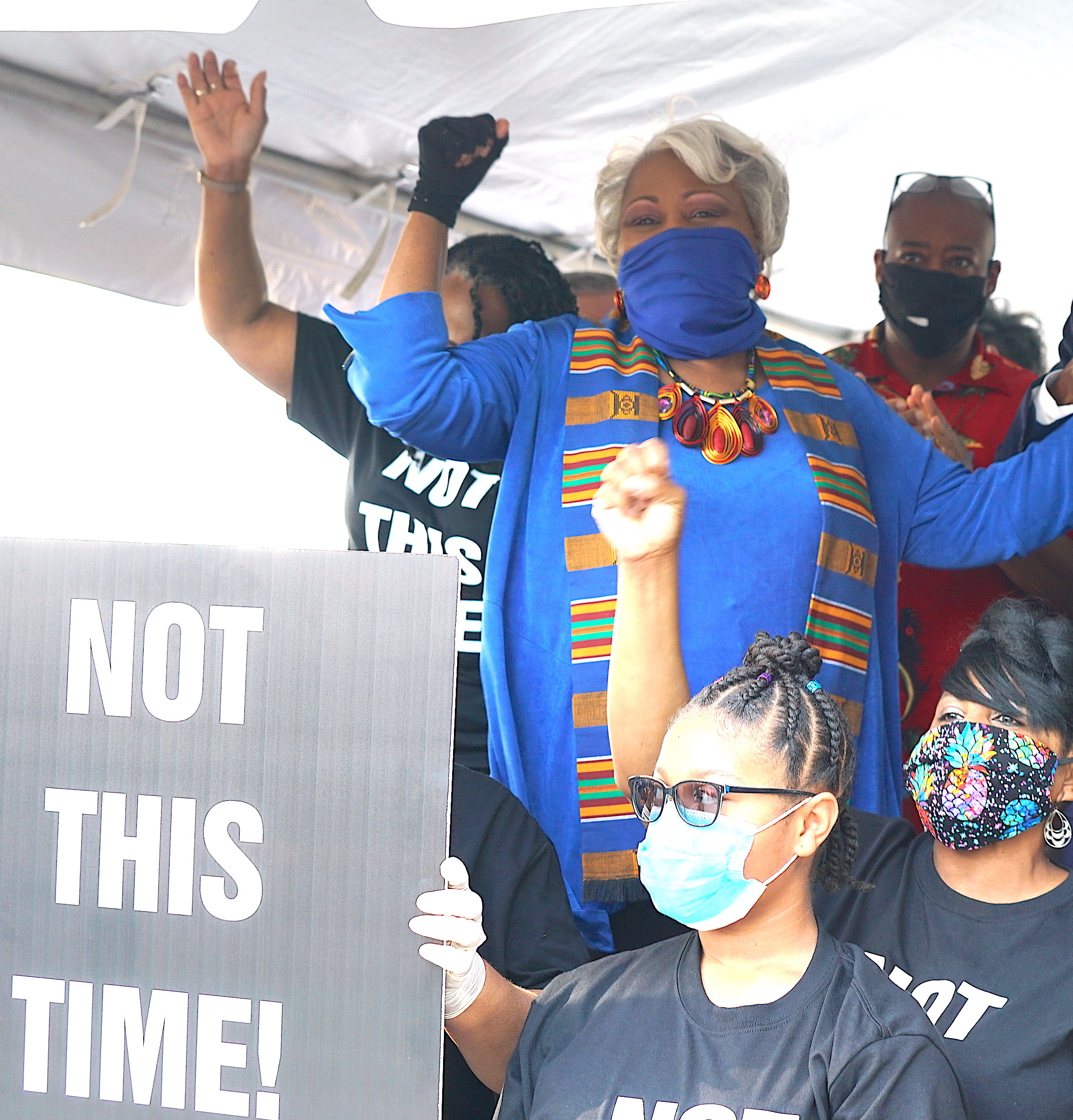 Black leaders in Portsmouth responded angrily on Tuesday (August 18) to felony charges brought against State Senator Louise Lucas and other citizens around a June 10 incident at the city’s downtown Confederate monument.

Sen. Lucas was charged with two felonies on Monday (August 17) by the Portsmouth Police Department for an incident of vandalism that occurred on June 10 during a protest at the city’s downtown Confederate monument. Lucas and others, including Portsmouth NAACP leaders James Boyd and Louie Gibbs and Portsmouth School Board member Lakeesha “Klu” Atkinson, are charged with conspiracy to commit a felony and injury to a monument in excess of $1,000.

Lucas was in Richmond on Monday preparing for the start of the special session of the Virginia General Assembly, where she planned to introduce police reform legislation, when the charges were announced. Sen. Lucas is being represented by her attorney Delegate Don Scott.

On Tuesday, the Martin Luther King, Jr. Leadership Steering Committee issued a press release announcing a Press Conference on Wednesday, August 19 at 5:30 pm in front of the Portsmouth Judicial Complex to address the arrest charges for 18 persons.

Many legal observers have said that the charges are unusual and constitute an overreach by the police department because they were not filed by Portsmouth Commonwealth Attorney Stephanie Morales’ office. The Portsmouth Police Department went directly to the magistrate and asked for the charges. Portsmouth Police Chief Angela Greene said that a discussion with Morales’ office “did not yield any action.” A Portsmouth judge ruled that the city did not own the monument and he was unable to determine the actual owner.

Following a public hearing in August, the Portsmouth City Council voted unanimously to remove it.

Some longtime Portsmouth residents think this is another political fight between Portsmouth law enforcement officials and elected political figures, with residents quickly pointing out several incidents in recent years such as when former Sheriff Bill Watson’s office filed charges against then mayor Kenny Wright and former city councilman Mark Whitaker.

On June 11, Sen. Lucas told the local media that PPD Chief Angela Greene should be fired by the city manager because of the way the protests at the Confederate monument were mishandled by the police department.

The Virginia Legislative Black Caucus has condemned the charges filed by the PPD. The VLBC said the timing of the charges was suspicious because the special session for the General Assembly was due to start Tuesday (Aug 18) and that Sen. Lucas intended to introduce legislation that would strengthen the “ability to independently investigate police departments statewide.”

Gov. Ralph Northam tweeted a response to the charges saying that they were “highly unusual.” He added, “It’s deeply troubling that on the verge of Virginia passing long-overdue police reform, the first Black woman to serve as our Senate Pro Tempore is suddenly facing highly unusual charges.

The Tidewater Solidarity Collective created a GoFundMe to benefit the 757 Solidarity Bail Fund set up by the nonprofit Humanities Behind Bars to assist those charged with legal costs. The fund raised $2,191.00 eight hours after being launched. This is a fast-moving story, please keep reading the New Journal and Guide for updates.