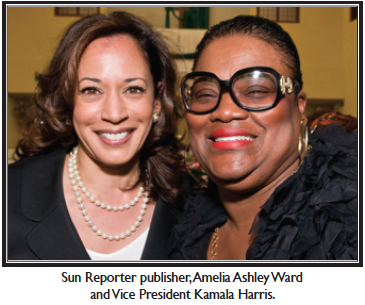 I lost a lot of sleep this week, anticipating the Inauguration of Kamala Devi Harris as the most powerful woman in American history.

I was anxious and I was happy. I was in disbelief, but also in awe. I was emotional and teary. I was full of praise, love, and respect for the woman and sisterfriend I decided to support and feature in the Sun-Reporter for her San Francisco District Attorney, California Attorney General, and United States Senator campaigns. We also supported her run for President.

I rose early Wednesday (Inauguration Day, January 20) to take a seat in front of my large television set. I had nervous energy, as I rocked back and forth.

I couldn’t wait for the first glimpse of her. I was eager to see what she was wearing. I wanted to see her walking side by side with President Joseph R. Biden. I mean, I kind of felt like this when President Barack Obama was inaugurated back in 2009 as the First Black President. But on this day, the feeling was even more magical.

This was our home girl, a girlfriend, someone with whom I had laughed and cried. She is now the most powerful woman in the country. Another first for the woman who has been the first in every political office she’s held.

I guess over all the years, Camelot and Cinderella had only been the fairy tales reserved for others and not meant for us. But with an obsession for freedom and justice and a spirited heart full of ambition, Kamala flipped the script.

After all, female action figures like Wonder Woman and Barbie dolls on display rarely represented us.

At last, we have a real Wonder Woman who represents strength and beauty. She’s the real deal: strong, fearless, mighty, brilliant and she looks like us. Her name is Kamala Devi Harris, Madame Vice President of the United States of America.

At last, the day had come. There she stood, regal in purple, after exiting from her official limousine. All eyes were on her.

I watched in admiration and cried Hallelujah! as she raised her hand to take the oath of office administered by the first Hispanic Supreme Court Justice Sonia Sotomayor. Little Black girls and girls across the country stood with raised hands, too. There’s glass everywhere with openings for them to enter and reach for the sky. Thank you, Madame Vice President Harris!

She is now equal to all the white men who had occupied the seat before her.

This moment in time will live forever within me. Her victory is our victory. She stands on the shoulders of Harriet Tubman, Sojourner Truth, Shirley Chisholm, and Rosa Parks.

I must admit, I dedicate the Sun-Reporter to fighting for equal opportunity and the election of Black women. It is my belief that if we work for them, they will also work for us. I plead their cause over and over and time and time again.

I guess favoring candidates is not the rule for real journalism, but the rules of this country have never favored us. The election of Vice President Kamala Harris to the second highest office in the land is my vindication.

In other words, I raise my right hand and place my left on the Bible and swear to do it again.

Vice President Harris said it best: “I may be the first, but I will not be the last.”