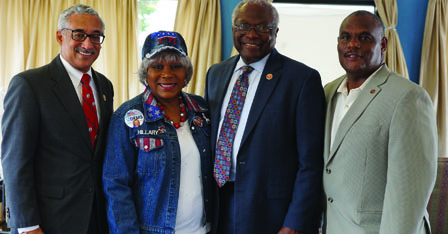 HAMPTON ROADS
The highest-ranking African-American in Congress, SC Rep. Jim Clyburn appeared with Congressman Bobby Scott-D-3rd District and local elected officials at ‘Commit to Vote’ rallies in Norfolk, Portsmouth, and Petersburg on Saturday (July 30). Clyburn was joined by Mayor Kenneth Alexander, Congressman Scott, and Shaun Brown, Democratic candidate for Virginia’s 2nd District, in Norfolk. Congressman Clyburn spoke to New Journal and Guide Publisher Brenda Andrews via cellphone and thanked her for support during the campaign and the newspaper’s service to the community.

Clyburn urged the audience to become actively engaged in the campaign to elect Hillary Clinton. Clyburn and Scott then journeyed to Petersburg to complete their “Commit to Vote” swing through Portsmouth, and Petersburg. These organizing events come on the heels of the Democratic National Convention, where Democrats laid out the clear stakes in this election – a choice between building walls and tearing people down or an optimistic unifying vision where everyone has a role to play in building our future.