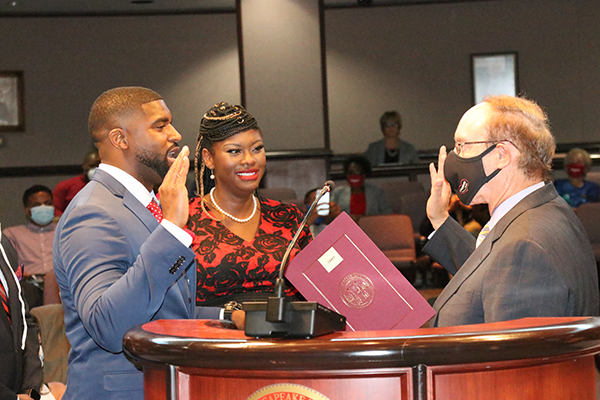 On Tuesday, July 14, 2020, the City of Chesapeake conducted its Oath of Office Ceremony in the City Hall chamber. On this day there were several city council members sworn in to champion and serve the city.

Carey retired after 10 successful years in the NFL playing for the Jaguars and Lions. He officially announced his bid in 2019 to run in this year’s election for Chesapeake City Council.

For the past several years, Don and his wife, Lakeisha Carey, have led a nonprofit organization called the REECH Foundation. The acronym REECH stands for for Reaching, Education and Empowering Children. They have held STEAM Camps in Grand Rapids, MI, Charlotte, NC and at his Alma Mater Norfolk State University.

Carey is a graduate of Booker T. Washington High School in Norfolk and NSU Varsity football.

When I surveyed the chamber I was pleased to see a healthy crowd, everyone wearing their masks. Upon entering the building if you did not have a mask, volunteers presented you with a City of Chesapeake named mask, I got one… nice too.

The swearing in lasted right around an hour, which included photos taken by friends and family members. Remarks from each elected candidate were brief.

Follow us
In this article:City Hall chamber, City of Chesapeake, Oath of Office Ceremony