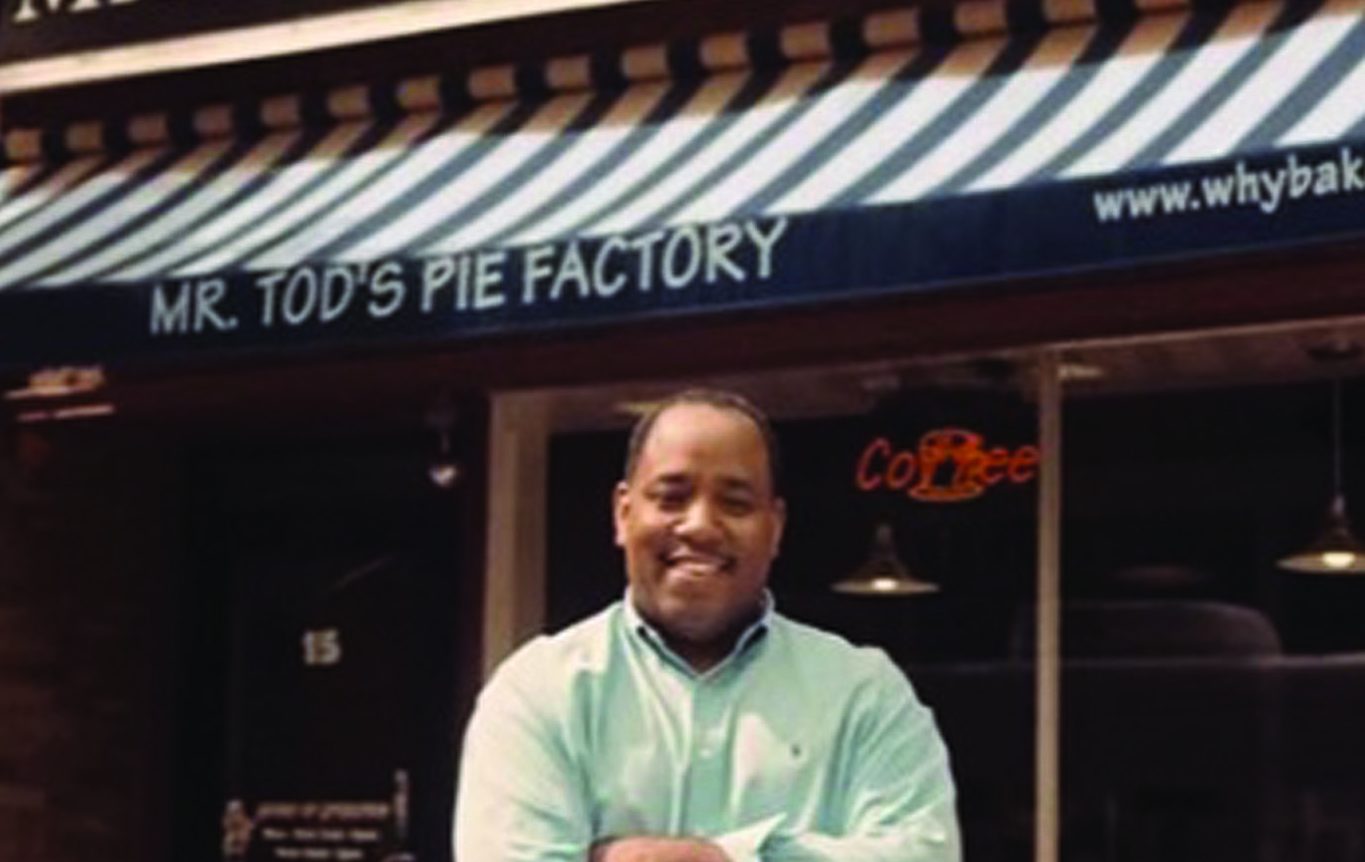 Some area residents already know him for his famous “sweet potato pies,” even calling him “The Sweet Potato Man.”

Tod Wilson, a 25-year baker and distributor, is a native of Portsmouth and a graduate of I.C. Norcom, who began Mr. Tod’s Pie Factory in 2002 by selling his signature bite-size sweet potato pies wholesale. His company later developed into two retail locations in the Somerset section of Franklin and Englewood, and a nationwide mail-order business.

Now Wilson has plans to extend his bakery business to his hometown.

Wilson is looking at the old Mary Jane Bakery plant at 1021 High Street, as a location to mass produce his famous pies and other bakery products.

He wants to make Mr. Tod’s Sweet Potato Pies a national brand, equal to Coke or the NFL.

At the same time he wants to help develop the area around the old facility in tune with the city’s efforts to revitalize itself economically.

He says he marvels at stories about how the Portsmouth’s downtown or corridor around ODU has been reinvented as a destination for business and culture.

As a Chef and businessman, Tod Wilson is a big believer in giving back to those who helped him along the way, and giving others a second chance.

He was born in Portsmouth, raised in the city’s Cavalier Manor section and is a product of I.C. Norcom High School.

He recalls that from 1984-86 he was a team captain on the Norcom Greyhounds’ varsity football team. The head coach then was the legendary Joe Langston.

Before he retired in 2001, no high school football coach in Portsmouth’s history, won more games or captured more track and field champions than Langston during his 27-year career.

Under Langston, the Norcom Greyhounds won 204 football games. His overall track record of 187-14 is the third best in state high school history.

Wilson said he is a member of a huge fraternity of Black men, who as youth, were captured by the spell of Langston and inspired to carry the torch of ambition throughout life.

“He would be the first to tell you to get off your ass and stop feeling sorry for yourself,” said Wilson. “No one gives you anything. You must work and secure those opportunities when they are presented to you.

“As an entrepreneur and businessman, I have carried his influence because you will encounter challenges and self doubt along the way.”

Langston’s words haunted Wislon, in a positive way, when his first business venture in Jersey folded and he was sleeping in the back of his car in 2001. It was the same time his mentor was retiring from coaching at Norcom.

Langston’s words gave him encouragement to be the first applicant on the network TV show Shark Tank where he was offered an infusion of cash to bolster his shaky business. But he stepped back from the deal, feeling he would lose too much equity in his business, because the investors wanted a share of it.

But he did not lose ground, or feel sorry for himself.

He was approached by QVC television to put his products on their network.

They placed an initial order of approximately 13,000 pies of which approximately 7,000 were sold in one hour on the station’s “Happy Hour Show” during the premiere of his product.

Wilson said the proximity of Portsmouth to the North Carolina border would allow him to market his culinary wares in the Tar Hill state and show his support for the jumbo yams from the state as well.

Wilson said he could provide training opportunities and employment to I.C. Norcom and other Portsmouth high school graduates.

After high school, Wilson secured his degree in Criminal Justice from the University of Richmond.

“I worked at the prison in Goochland and the Richmond City Jail,” recalled Wilson. “I met so many young men and women incarcerated, who had made bad decisions, and had talent. I knew they could make life better for themselves if given a second chance.

“There are a lot of people, reentering the community from prison,” said Wilson. “And many of them have been training in culinary arts because they have worked in the prison kitchens. I want to give them a chance to get to use those skills to secure employment and establish themselves.”

Wilson said he aspires to make Mr. Tod’s Sweet Potato Pie brand as familiar as others, including the now famous Pattie LaBelle.

“When people go out to buy one, I just don’t want them to look for a sweet potato pie,” said Wilson “I want them ask for a Mr. Tod … period.”

His ingredients are secret. But he did reveal that “there is a lot of love and passion in them. I learned from my mother who taught me how to make them.”

Meet and greet Portsmouth native Chef Tod on May 18 at the Taste of NSU, from 6pm – 9pm, where he will have samples of his famous sweet potato pie. Chef Danielle Saunders, his fiancé, is the featured Celebrity Chef for Taste of NSU, an evening of culture by NSU performing arts students and delicious cuisine. Proceeds will benefit NSU student scholarships. Individual tickets are $35.00 at nsu.edu/tasteofnsu

Next Week: Meet Chef Tod’s fiancé, Chef Danielle Saunders, the featured celebrity at the Taste of NSU on May 18, 2017. She is the first African-American woman to win the Food Network competition show “Chopped.”