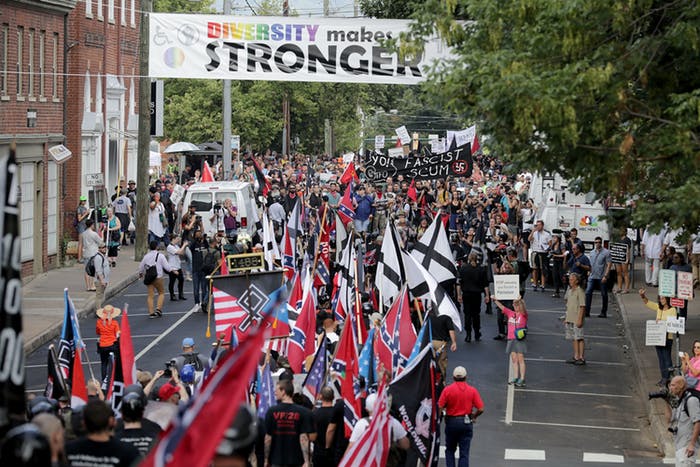 A $3 million lawsuit has been filed by Tadrint and Micah Washington, two African-American sisters (who did not participate in the recent Unite the Right protest in Charlottesville); but they were both injured when a Dodge Challenger slammed into the crowd and rammed into the rear of their car.

According to the lawsuit, the Washingtons were on their way home that afternoon but were rerouted through Charlottesville due to detours. It was there, between Main and Water streets, that James Alex Fields Jr. of Ohio allegedly drove his Dodge Challenger into the back of their car. The car he was driving injured both sisters, who were later treated at the University of Virginia Medical Center.

Heather Heyer, 32, was killed and 19 others were injured by the car driven by Fields who was charged with second-degree murder, hit and run, and three counts of malicious wounding in Charlottesville, according to news reports. Fields was denied bail in his first court appearance in connection with the Charlottesville attack.

The 28-page complaint alleges the sisters were slammed into the dashboard and windshield, leaving them with serious injuries. The lawsuit was filed against individuals and organizers. The document named more than two-dozen right-wing and neo-Nazi groups. The lawsuit was filed on Aug. 15 against Unite the Right organizer Jason Kessler, James Alex Fields Jr., Richard Spencer and 30 other groups and individuals.

The suit asks for a jury trial, $3 million in compensatory damages and $350,000 in punitive damages. The complaint accuses each of the defendants and their various organizations of engaging in a civil conspiracy to sponsor “violent acts and terrorism.” It also said that the far-right leaders and their groups had “intended to cause physical harm and incite fear in the public.”

According to The National Law Journal, Heather Heyer, 32, who was killed during the protests was also a legal assistant at the Miller Law Firm, which is representing the Washington sisters.

In recent news reports, Michael Miller, the lawyer who filed the lawsuit on behalf of the Washington sisters, said, “I’ve sued Islamic terrorists before, and I’m not going to let these white terrorists succeed in anything now.”

In an Aug. 16 interview in The National Law Journal, Timothy Litzenburg, who practices with the Miller Law Firm based in Orange, Va., said, “The lawsuit asks for more than $3 million in damages, but Litzenburg said the ”whole reason” to file the lawsuit is to bring the case before a jury in Charlottesville. Charlottesville citizens, like the Washington sisters, deserve a chance to evaluate for themselves what happened in their city.”

Litzenburg added, “I think that it’s scary times we live in today, that these things are allowed to go forward,” he said. “I’m very proud to represent the Washington sisters, who have the courage to stand up to fascism, when our own president doesn’t.”

According to the document, the plaintiffs were “severely injured and suffered great physical, mental, and emotional pain and injury and required and received medical care and treatment and incurred medical expenses.”

Attorney General Jeff Sessions said in television appearances that the violence met the definition of domestic terrorism. While the Miller Law Firm is known for fighting against foreign entities that provide support to terrorists overseas, this is the Miller Firm’s first case in which the alleged terrorists are U.S. nationals.

According to The Washington Post, Fields, 20, the driver of the Dodge Challenger that killed one and injured 19, terrified his disabled mother – who uses a wheelchair – when he was a teen in 2001. His mother locked herself in a bathroom, called 911 and said her son had struck her head and put his hands over her mouth when she told him to stop playing a video game, according to police records.

On another occasion, records show, he brandished a 12-inch knife. Once, he spit in her face.