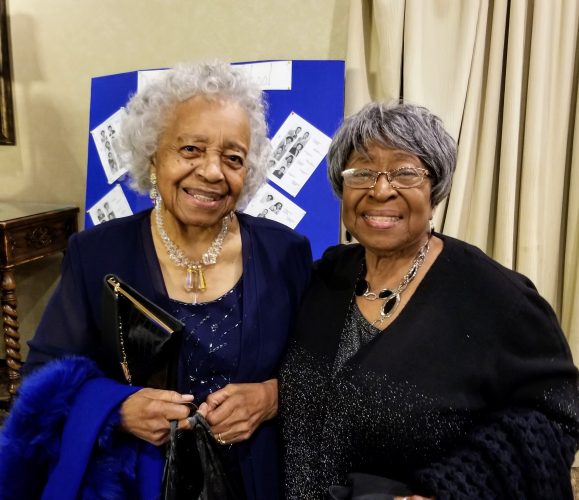 Over 400 alumni, faculty and friends the historic Crestwood High School gathered at the Blue and Gold Gala on Nov. to remember their high school days. The all-Black high school opened in 1954 and closed in 1971 as a result of school desegregation. Left photo: Crestwood teachers Mrs. Vincent and Mrs. Duke. Right Photo: Keynote speaker Dr. Julian Earls. Brooks Photography Ltd. was the official photographer.

Old Norfolk County, the former Douglas Park community in Portsmouth and the storied Crestwood High School all have a distinct but intertwined history and legacy.

Norfolk County which no longer exists was a huge expanse of land that ran from Norfolk City’s Ocean View section to the North Carolina border.

Old Douglas Park, which was later annexed into Portsmouth City, had one of the first high schools for Blacks living in Norfolk County.

As the number of Black children in the huge county grew, Douglas gave way to Norfolk County High School, and eventually Crestwood, operating from 1954 to 1971.

Crestwood High School was set aside for African-American children who did not live in Norfolk, Portsmouth or Princess Anne County (Virginia Beach now) before desegregation was imposed.

Former students and faculty, and hopefully another generation who care about preserving Crestwood’s legacy, gathered Nov. 2 for the first Blue and Gold Gala at the Dry Dock Club in Portsmouth. The event, according to Crestwood graduate, Kenny Chesson, was organized by the Crestwood High School Alumni Association, (CHSAA) Inc., a nonprofit founded in 2018.

The keynote speaker was Dr. Julian Earls, a 1960 graduate of the school and a nationally renowned physicist who rose through the ranks to become the ninth center director of the NASA Glenn Research Center in Cleveland, Ohio.

Chesson is a 1966 graduate of the high school and had a long career as a meteorologist for the United States Air Force before retiring.

“If you ask many young people, they have no idea about the history of Crestwood or Norfolk County,” said Chesson, who lives in Chesapeake. “The nation is celebrating the 400th anniversary of the arrival of Africans to this country to remind people of the whole story of our contributions to the nation.”

“We want the history and the legacy of the schools of Douglas Park and Crestwood communities to be included in that history,” he continued. “The Alumni Association’s members want older and newer future ones to know and appreciate the history and legacy of Crestwood High School.”

Chesson said when Crestwood finally closed in the early 1970s, due to desegregation, it was converted to a middle school. Many of the physical historical artifacts such as awards, yearbooks and other treasures were trashed.

But Chesson said historians have dug into the public archives and the alumni have provided their fond memories to construct a viable history of the school.

Crestwood opened in 1954, the same year the Brown Decision was issued declaring “separate but equal” public schools illegal. Crestwood High School students were segregated in a building that was structurally identical to two high schools that served whites.

But materially, Crestwood was not identical nor equal, compared to those “all-white” schools when it first opened.

Yet, despite the material shortcomings, Crestwood, according to alumni, was noted for its academic and athletic prowess in the region and statewide.