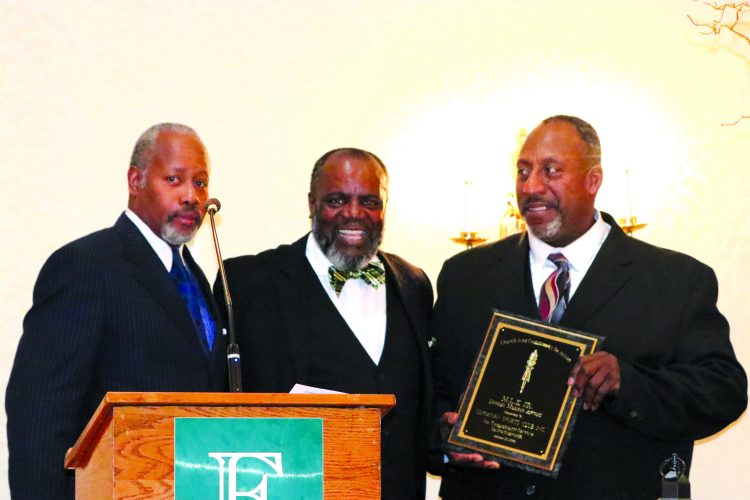 Portsmouth citizens turned out in great numbers to attend the Annual MLK I Have A Dream Breakfast presented by the Church and Community in Action at the Edmonds Center. This year’s theme was “Embracing Our Dream Makers.” The keynote speaker was Brenda H. Andrews, Publisher and Owner of the New Journal and Guide.

The annual observance of Dr. Martin Luther King Jr.’s birthday brings together Portsmouth’s civic, religious, and local government leaders. Attending the breakfast and bringing greetings was Portsmouth’s Mayor John Rowe. Also in attendance were the city’s Vice Mayor and the Chief of Police, among other city officials. Chesapeake City Councilwoman Dr. Ella Ward was present as a member of the Delta Sigma Theta Sorority being honored. Dr. Kelvin Turner served as the Master of Ceremony.

Publisher Andrews opened her speech with a story from a speech she had delivered on King Day in her hometown of Lynchburg, Va. In it she referenced a conversation she had with a Lynchburg citizen who identified himself as a “recovering racist.”

“Here was a man who had changed his patterns of learned racist thinking and behavior. And yet, recovering suggested to me that he felt he was not fully cured. He had not truly overcome, but he was working on it. He was in remission of a cultural sickness that was dormant but believed it could resurface and reemerge if it were triggered by a stimulus. Much like a stubborn cancer that attacks the body and is treated into remission but then returns.”

Andrews continued, “As I watched the emboldened and public march in Charlottesville in 2017 of supporters fueled by the resurgent ideals of the KKK, I remembered that conversation and I wondered how many of the protesters had relapsed into former behavior that had never gone away, but had been dormant and in remission awaiting a stimulus.”

That stimulus, she went on to say, has come about over recent years as a backlash to the election and two-term presidency of Barack Obama, the nation’s first African American elected President.

“We live today in a country that reminds some of us of the days we faced 50 years ago when Dr. Martin Luther King was alive. It is certainly different in many respects, but it can best be described as a backlash moment.”

Much of her speech included the words of Dr. King through excerpts from his speeches. She concluded her speech with the conclusion of King’s “I Have A Dream” speech.

“There are those who are asking the devotees of civil rights, ‘When will you be satisfied?’, King said as he offered reasons not to be satisfied.

“… No, no, we are not satisfied and we will not be satisfied until justice rolls down like waters and righteousness like a mighty stream.”

The CCIA made several presentations following the keynote speech. Each of the Divine Nine fraternity and sorority organizations was presented a plaque of appreciation.