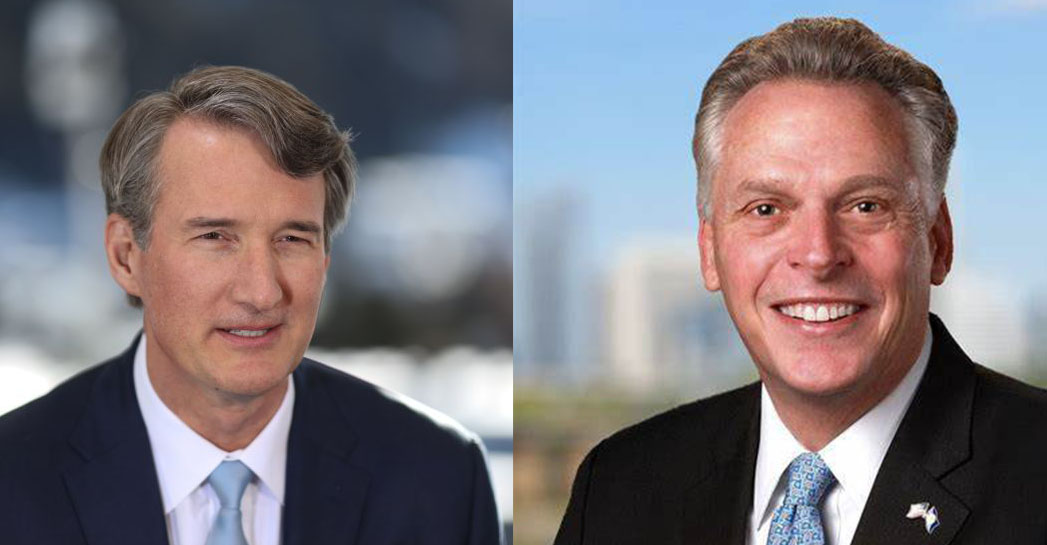 With less than a month to go, the Democratic and GOP contenders for governor are fine-tuning their messages to voters, as polls show a close contest.

Democrat Terry McAuliffe and Republican Glenn Youngkin are the nominees for Virginia’s Governor for their respective parties.

Also on the ballot are State Delegate Hala Ayala, who represents the 51st District, and is the Democratic nominee for Lt. Governor.

Winsome Sears, who once represented Norfolk’s 90th House District, is the Lt. Governor nominee for the GOP.

If either of them wins the General Election on Nov 2, one will be the first woman of color to capture a statewide office.

Incumbent Mark Herring, the Democrat, is seeking a third term as Attorney General against Republican Mark Miyares, who represents the 82nd House District.

Along with these top three offices, all 100 seats of the House of Delegates are on the November 2 ballot this fall. Currently, there are 55 Democrats and 45 Republicans in the House.

The stand on issues voiced by the candidates for Governor usually garners the most attention from voters and the media.

So until Election Day on November 2, McAuliffe and Youngkin will be honing their respective messages on economic development, jobs creation, education, public safety, and competent administration of the state government.

Abortion, civil rights, and combating the renewed rise in COVID-19 infections, hospitalizations and deaths are issues resonating as well with voters and are being addressed by the candidates, as well.

Virginia Democrats, riding a progressive blue wave for the past eight years, are hoping to avert a Republican takeover of state government and application of right wing policies popular with the GOP base.

Polls indicate a very tight race, giving McAuliffe a narrow lead over Youngkin. According to the latest survey from Monmouth University Poll released on Monday (September 27), McAuliffe, the former Virginia governor from 2014 to 2018, leads Youngkin, 48 percent to 43 percent with less than two months until the election.

A good portion of a recent debate between McAuliffe, and Youngkin, an equity broker for the Carlyle Group who is running his first election, dealt with civil rights, election integrity, vaccine mandates, and abortion policy.

“I have been a strong, strong advocate for everyone to get the vaccine,” said Youngkin. “I do believe that individuals should be allowed to make that decision on their own.”

McAuliffe criticized him for failing to show leadership, saying at one point in the debate, “His Day One plan would be to unleash COVID because he doesn’t believe we should mandate (mask and vaccine) vaccinations.”

McAuliffe said Youngkin has urged college students to use loopholes to get past universities’ vaccine mandates.

Although the Republican denies it, McAuliffe suggested Youngkin would be a clone of former President Trump. He echoed fears of Democrats regarding the new Texas abortion law. It forbids a procedure after six weeks and would allow citizens to sue people who are involved in the procedure.

Youngkin said he supports abortion in case of rape, incest or to save a mother’s life, none of which are conditions in the new Texas law.

On the issue of “election integrity” both candidates said they would concede if they lost the election.

Since the murder of George Floyd by convicted former police office Derek Chauvin, activists have aimed to abolish “qualified Immunity” which protects abusive officers from financial liability. This issue resonates with Blacks, who are often the victims of police abuses. Both candidates said they would not support its abolition.

Despite an enthusiasm gap, both parties are gearing up to turn out their bases of support.

Democrats as usual are expecting Black voter turn out which has helped the party dominate the past three statewide races. Eighty-seven percent of African Americans voters have supported the Democrats.

“Youngkin is saying that the Democrats have been too liberal,” said Dr. Eric Claville, Director of The Center for African American Public Policy (CAAmPP)

at Norfolk State University. “But he is embracing the same old Republican tropes of the past, on business, and public safety, school choice and lowering taxes. He is not addressing issues on civil rights, healthcare expansion, and equity in education which are important to Blacks.”

Youngkin has proposed to end the sales tax on groceries to help low and middle-income Virginians.

But, Claville said, revenue from that tax is devoted to education and infrastructure and killing it would mean the state would have to access another source.

Claville said Virginians are resigned to accept abortion as a norm and a personal choice, and this has not proven to be an issue most voters are interested in, unlike COVID-19 or funding education.

Youngkin has avoided talking about or embracing sharper points of Trumpism which Blacks deem as a code to turn the culture back to the 1950s.

McAuliffe, on most issues, Claville said, is embracing the progressive policies pursued by Democrats in the legislature, which are shared by women and minorities.

Republican-leaning Bill Thomas is Hampton University’s Associate Vice President for Governmental Relations. He said that the issues debate between the two candidates is blurry and focuses on stands the parties have expressed before, which have not

Thomas said the parties should create programs that address the needs of people from 17 to 54 years of age.

“This is when people need healthcare education, career opportunities, and steady jobs that pay a living wage,” said Thomas.

“I want to see in writing…promises of how we can invest in people during their productive years, as opposed to when people are too old or sick.”

Thomas is critical of the GOP’s campaign. He said it has only used symbolic images of supporting Blacks in TV ads. Youngkin has failed to go directly into the community and talk to Blacks about economic and educational issues.

He said the GOP talks about the diversity of their candidates, but “it’s only lip-service too.”

“Winsome Sears is a Black woman, a Marine veteran, a parent, and businesswoman,” said Thomas. “But Republicans do not know how to use her to go out and talk to Black people and gain their support.”