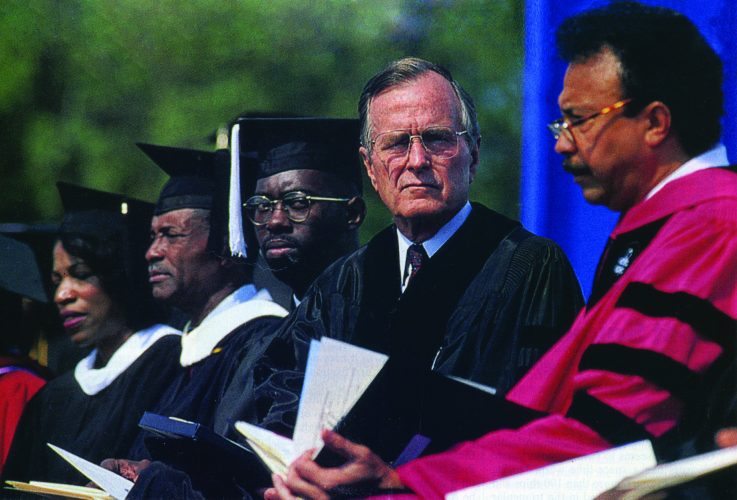 In 1992, President George Bush accepted the invitation of Hampton University President William Harvey to be the university’s Commencement Speaker. It is one of many memories shared by Dr. Harvey, who was appointed by Bush as a member of the President’s Board of Advisors on Historically Black Colleges and Universities (HBCUs), in an op-ed piece he wrote in tribute to the late President.

It was a privilege and honor for me to have a friendly and professional relationship with President George H. W. Bush.

I found him to be an extraordinary man of love, values, principles, standards, honesty, compassion, loyalty, camaraderie, and character.

First and foremost, he loved his family and simply adored his wife of 73 years. She was the love of his life and that was very evident whenever they were in each other’s company. They clearly were soulmates. Mrs. Bush once said that President Bush was the first and only man that she had ever kissed.

Many have said that he was the most experienced person to ever become President of the United States. It would be difficult to challenge that assertion when considering that he served as a Congressman from Texas, C.I.A. Director, Ambassador to the United Nations, Diplomatic Envoy to China, and Vice President, before becoming President of the United States. He believed strongly in service to his country, beginning by volunteering for the U. S. Navy at the age of 18. While serving, he became the youngest Navy combat pilot and was actually shot down during a mission in WWII.

I met President Bush before he became president, but did not get to converse with him until after he had appointed me as a member of the President’s Board of Advisors on Historically Black Colleges and Universities (HBCUs).

In view of President Bush’s long-standing support of Historically Black Colleges and Universities, I was particularly pleased that he accepted our invitation to deliver the 1991 Commencement address at Hampton University.

As an early example of his commitment to enhancing Black colleges and universities, President Bush founded the United Negro College Fund, (UNCF) chapter at Yale University during his college days. As president, he continued his overwhelmingly positive support for Black Colleges with the following initiatives:

• On Sept. 20, 1990, he appointed 23 individuals to the President’s Board of Advisors on Historically Black Colleges and Universities to advise him and the Secretary of Education on ways to strengthen the HBCUs.

• Directed the Office of Personnel Management, in conjunction with the Secretaries of Labor and Education, to develop a program to improve the recruitment of graduate, and undergraduate HBCU students for part-time and summer federal positions.

• Invited Hampton University to nominate a student to spend a semester at the White House as a White House Intern.

• Encouraged the development of the 15-member Historically Black College and University/Minority Institution Consortium, which had been awarded 4.3 million dollars. This academic partnership program was aimed at increasing the number of scientists, engineers and other professionals, including technicians, in the growing fields of environmental restoration and waste management. Hampton University was a participant in this program.

• Directed the White House Initiative Office to pair 14 of the nation’s HBCUs with seven Midwestern research universities to improve the research capabilities of the HBCUs. The new coalition was known as the University Consortium for Research and Development. Hampton University was a participant in this program.

• Signed Executive Order 12677, which directed 27 agencies to increase the opportunities for the participation of HBCUs in federal programs. Increases in total funding over the fiscal years 1989 award levels were reported by most of these agencies. HBCUs received a total of $776 million in fiscal year 1989 and $894 million in fiscal year 1990, an increase of $118 million dollars. Under the Bush Administration, Hampton University alone received unparalleled support for strengthening its programs and improving its facilities.

My personal association with him was an extraordinary one. I visited the President in the White House and he visited with my family and me in Hampton’s Mansion House. In this regard, there are several personal interactions that I would like to share.

The first one occurred when we were getting ready to leave the Mansion House and go to Armstrong Stadium for the 1991 Commencement exercises. As Mrs. Harvey, President Bush and I walked out of the front door, he turned to my wife with a smile and said, “Norma, come ride with me in the Presidential limousine; Bill can ride in his car.” That incident continues to be a source of laughter for my wife and me. I still tease her about the fact that unlike her, I have never ridden in a presidential limousine.

Secondly, we still laugh about the fact that when our children, Kelly, Chris and Leslie ventured outside during President Bush’s visit, the Secret Service did not allow them to come back in until I verified that they were indeed our children.

Thirdly, as a result of his eating or drinking something on a recent trip to Asia, President Bush became ill. This prompted the Secret Service to always carry his food and water with him whenever he was out of the White House.

We still have a full bottle of water from 1991 on the shelf above our bar that the Secret Service brought to the Mansion House for him.

Fourthly, upon his return to the White House, President Bush sent me a handwritten note. He stated in the note, “I sure enjoyed my trip to Hampton. My best to your family and my thanks to you.” I have a framed copy of this “Dear Bill” letter on the wall in my office.

Fifthly, on one occasion when visiting with him in the Oval Office of the White House, he made the comment, “Bill, you are always so impeccably dressed. Do you have any Presidential Cufflinks?” I replied that I did not and upon doing so, he got up, went to his desk, pulled out a drawer and gave me a pair of gold Presidential Cufflinks. I still wear them at times today.

One of the regrettable personal interactions with President Bush was that after leaving the White House, he invited me twice to come to Texas to play golf with him at his club. I was always “too busy” and never did. I truly regret not following through on President Bush’s invitation.

A final personal moment that I would like to share came during a gala event for my 25th anniversary as president of Hampton. After finishing our meal, the mistress of ceremony went to the microphone and said we have a surprise video that we would like to show everyone now for the first time, including President Harvey. It was a video tribute to me by President Bush for my service for 25 years.

In the video, President Bush had some awfully kind things to say about me and I must admit that my eyes welled up with tears. Always humorous, his last comments were to the Board of Trustees members present. He said, “President Harvey has served well. He deserves a sabbatical and I want for you to give him one.” My Trustees listened and they did give my wife and me a 9-month sabbatical, which we took in Hilton Head, SC.

Finally, let me say that this man, George Herbert Walker Bush, was a role model in many, many ways – as a man and as a politician – whether they were republican or democrat.

He governed according to what he thought was right for the people, not the political party. Sometimes his non-partisan actions got him into political trouble, but that didn’t matter with him if he thought it was the right thing to do.

He also talked often about forgiveness. I remember one time I was in the Oval Office when there had been a particularly critical report out on him a couple of days before. I asked him about it, and he said that he could not stay angry with reporters, politicians or others who had denounced, been critical or even lied on him. I specifically asked him about that latest flair up and he laughingly said, “Even if I get upset for the moment, I get over it quickly.

Most times they don’t mean it; it’s just politics.”

That forgiving statement was the epitome of this wonderful, honorable and great leader!

Dr. Harvey is the president of Hampton University. 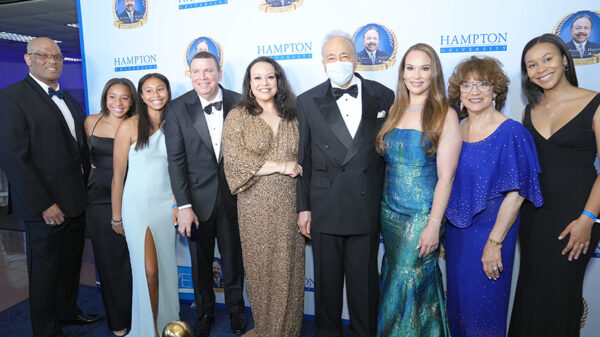 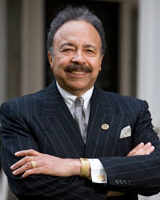