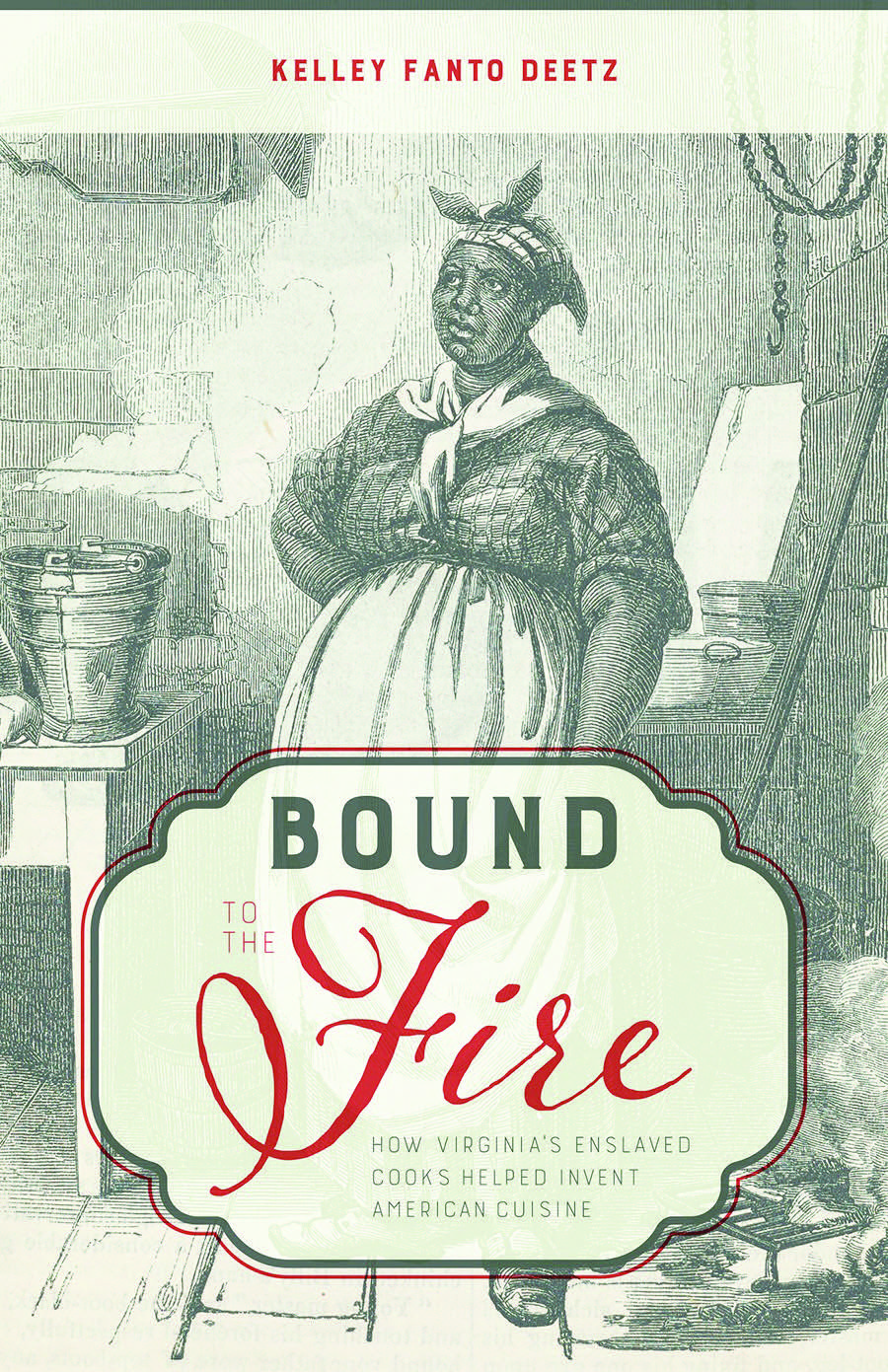 You’ve been cooking up a storm for days.

Soon, the whole family will be sitting at your table, which will be loaded down with everybody’s favorites. The turkey will be golden. The bread, warm and soft. Pies line your kitchen counter because you’ve cooked for days. At least, as you’ll see in “Bound to the Fire” by Kelley Fanto Deetz, you didn’t cook ‘round the clock, too.

Most of us, says Deetz, are used to seeing Black faces on boxes of our breakfast foods. We might not notice them much anymore but those trademarked figures hide an often misunderstood truth.

The “Black community” in Virginia, says Deetz, “is almost as old as the colony itself.” In 1619, some twenty “negroes” lived in Jamestown; by 1625, there were 23 “Africans” in all of Virginia. Once slavery took firm hold in the state, there were tens of thousands of enslaved people but Deetz focuses on cooks, beginning with plantation homes.

As slavery expanded, kitchens began to be set apart from the main house, probably because white plantation owners didn’t want slaves under their roofs. For enslaved cooks and their families, that was both good and bad: more privacy was gained by living in the building where the kitchen was, and accommodations were usually larger than in the slave cabins – but that proximity meant that cooks were constantly on-call.

It took “a network of enslaved folks” to put food on the table, not only in growing the food, but in what may have been a house-staff of dozens. Cooks cooked, but they were also bakers, butchers, brewers, distillers, and sometimes, laundresses. A cook was likely taught to read and do “basic math,” and she (sometimes, he) taught kitchen chores to new slaves. Despite a constant likelihood of abuse and brutality, cooks often had surprising power over their mistresses and may’ve even negotiated their own circumstances.

And if things went really bad, there was always the danger-filled chance for a cook to tamper with the food…

There are, as author Kelley Fanto Deetz indicates in her introduction, several myths and misunderstandings related to enslaved cooks. There were, until now, many unknowns. “Bound to the Fire” sets things straight, but cooking isn’t the only focus here.

What would “Southern hospitality” be without the influence of enslaved cooks? Not much, as Deetz indicates – and Southern architecture would be the lesser, too. Using documents and research, Deetz explains how this is so, which leads to a fascinating look at day-to-day work of Virginia cooks, the power they wielded, and how they influenced what you’ll eat this holiday season. You’ll come to eagerly anticipate those tales, and they serve to underscore Deetz’s final point: Americans must look beyond stereotypes and be mindful of those who literally nourished a nation.

Be aware that this is not a cookbook. Instead, this is a book of history and a chance to set it straight. Yes, there are old-timey half-recipes in here but really, “Bound to the Fire” is meant for opening eyes, rather than mouths.