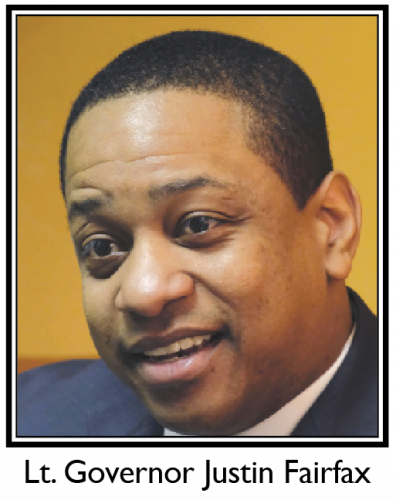 Lt. Governor Fairfax may the most vulnerable of the three top political leaders in Virginia under the cloud of scandal, due to the allegations of sexual misconduct.

But, on February 14, an organization calling itself “Sister Lead Sister Vote,” issued a statement of support for the embattled Fairfax.

Based in northern Virginia, Sisters Lead Sisters Vote (SLSV ) is a 501(c) 4 organization, led by an intergenerational group of Black women from various political, civic and religious organizations.

The statement of support included the names of 110 religious, political and civic leaders, including a number of men, who support the organization’s stand on Fairfax.

The names include women and men from across Virginia, including Hampton Roads, Northern Virginia, Georgia, Texas, Michigan, and New York.

“(T)he undersigned Black women (and men) leaders and voters of the Commonwealth of Virginia and our allies are writing this public statement in response the call for Lt. Governor Justin Fairfax to resign based on sexual assault allegations which he vehemently denies,” the press statement said.

“While accusations of sexual assault are serious and should be treated as such, we also believe that any calls for Lt. Governor Fairfax’s resignation at this point are premature and lack any notions of fairness and due process.”

We strongly believe that every woman who is brave enough to come forward with allegations of sexual assault, including Dr. Vanessa C. Tyson and Ms. Meredith Watson, should be heard, respected and have their allegations be taken seriously,” the statement continued.

“Further, we just vehemently believe that allegations alone are not tantamount to guilt. We cannot forego due process and claims to end in a society which values justice.”

“Sister Lead Sister Vote” was founded in 2018, identified four major goals (1) We support issues and policy that affect the well-being of Black women, their families and communities of African descent and economically disadvantaged communities;

(2) We provide education about issues, candidates for political office and the political process;

(3) We promote the civic engagement and participation and community leadership of women of African descent and the diaspora in America; and

(4) We engage and organize our community locally, nationally and online to stand for the issues, policies and people that impact the lives of Black women and their families.