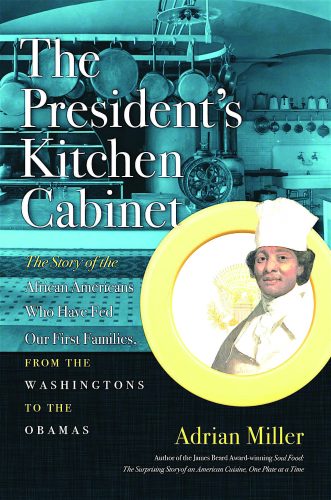 The title of his 2017 book is “The President’s Kitchen Cabinet: The Story of the African-Americans Who Have Fed Our First Families, From the Washingtons to the Obamas.” The book goes behind the scenes to examine more than 150 chefs, personal cooks, butlers, stewards, and servers of color. Black chefs offer 20 original recipes in his book, which includes cooking techniques and equipment tips.

“There just hadn‘t been a real history of these folks,” said Miller, 48, an attorney who worked in the Clinton White House. “I wanted to show that they were culinary artists who were celebrated in their time.”

He added in a 2015 press release announcing his new book on his publisher’s website (Westword), “Every president has had an African-American in the kitchen. They landed in presidential kitchens for various reasons over the decades. Originally, most were slaves or family servants; eventually, family members of those who had previously worked for the White House got jobs there. But over the last thirty years or so, professional connections have been the most important factor in who gets selected. Military cooks also come on loan from the Armed Forces.”

The book covers cooks from the George Washington White House to the present. Miller compiled his new book by sorting through records on the Internet, in libraries, in old cookbooks. He read articles from White House sources.

“I‘m most proud that I could put together the long list of cooks and chefs who worked for presidents all through history. I wanted to name these people. Most accounts just say „negro“ or „colored“ cook. I found that they were often friends and confidants of the first families, and also civil rights advocates,” he said.

Flip through his book. Notice it contains unconventional recipes such as Jerk Chicken Pita Pizza created by Charlie Redden, a former executive chef who cooked for senior staff in the West Wing. Redden made the pizza for the Clintons.

The book contains more recipes like Caroline Harrison’s Deviled Eggs. African-American chef Dollie Johnson made the popular snack for Benjamin and Caroline Harrison who lived in the White House in the late 1880s. It also contains the recipe for George Washington’s Minted Pea Soup.

Miller’s 2017 book came on the heels of his award-winning 2013 book, “Soul Food: The Surprising Story of an American Cuisine, One Plate at a Time.”

Miller said he stumbled over five stories about African-Americans who cook cooked for presidents while researching his 2013 book, which won a James Beard Award.

“I wanted to know more,” said Miller, a Georgetown University law school graduate, who currently serves as the executive director of the Colorado Council of Churches.

Both books aim to re-brand soul food, he said. “Generally, people think two ways; one is with a warning label that it‘s nutritionally deadly. The other is that it‘s the master‘s leftovers or throwaways.”

Miller added, “It kills me when African-American chefs say they don‘t want to be pigeonholed for their soul food. Outside of the Black community, non-Blacks are making a ton of money that way. What‘s the story with that?”