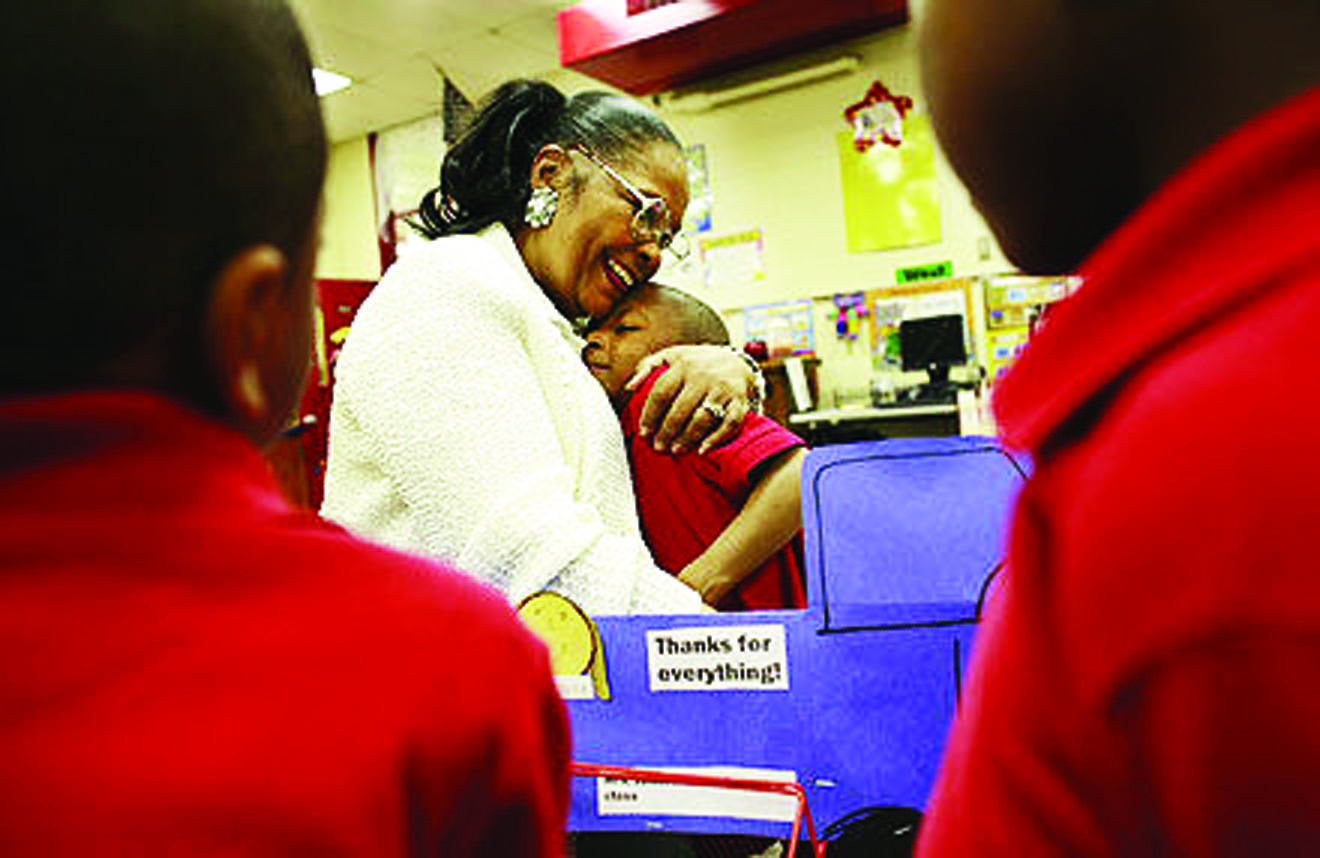 Dr. Sarah Peoples Perry retired as the principal of Campostella Elementary School in 2008, hopped on a plane to United Arab Emirates, and taught there for five years before returning home to Hampton Roads.

Since October 2016, she has headed the federally-funded 21st Century Community Learning Center’s program. It is providing tutorial and enrichment activities to 97 students who are enrolled at The Southside STEM Academy at Campostella and attend the Southside Boys and Girls Club which Greg Shivers heads. Launched with a $190,000 partnership grant, the after-school program has 10 teachers who offer an array of services to The Southside STEM Academy at Campostella, which opened in the fall of 2016 and is not yet accredited.

“I had to do something to help,” Peoples Perry said in a recent phone interview, describing how she grew up in a public housing project in the Campostella neighborhood, graduated from Booker T. Washington High in 1963, and earned a degree in elementary education at Norfolk State University in 1968. Enrolling in Regent University, she earned her master’s degree in 1990 and her doctoral degree in 2003.

“I knew it was in the hands of the people to make it better,” said Peoples Perry who served as the principal of Campostella Elementary for five years. “When I went to Campostella in 2003, it was not accredited. But I left the school accredited. I was determined to prove that African-American students knew as much as anyone else, and that the children would learn under my watch.”

Of her new role, she said, “I have two goals. One of my goals is to improve the lives of our students through education by working with positive adults who want to make a positive impact so that it will be better than when we found it. My other goal is to help the school become accredited and to work with those students who are not learning.”

In a sense, Peoples Perry puts a face on the philosophy that motivated Dr. Carter G. Woodson to launch Black History Month in 1926. By returning to the same neighborhood where she once skipped rope as a child and took it to heart when concerned neighbors pushed her to excel academically, she brings into sharp focus this year’s Black History Month theme, Crisis in Black Education.

Pointing to a long list of people who aim to help The Southside STEM Academy at Campostella gain its accreditation, she said, “I was placed on this earth for leadership and service. I believe God put it in my mind to do that. I knew the people in the community were hurting and our system was failing. I had to do something to help. That’s why I like this book,” she said, referring to the 1933 book by Dr. Carter G. Woodson, The Mis-Education of the Negro.

The seasoned educator, in other words, expresses concerns that stream through Woodson’s still popular book. To end the crisis, Woodson said on page 117, “The matter is one which rests largely with the Negroes themselves. No one else can accomplish this task for the race.”

To Woodson, the real problem in education was racial bias, a topic he learned about firsthand. If he had not been born a decade after slavery ended, or died 15 years before the 1965 Civil Rights Act was passed, Woodson may not have held stern and unflinching views about the need to instill self-reliance and self-respect into students of color.

“The Negro must treat the disease rather than its symptoms,” said Woodson, who was born to sharecroppers in 1875 in New Canton, Va. He died of a heart attack in his office in Washington, D.C. in 1950 at age 74. As a teen, he worked in a coal mine in West Virginia. Although he grew up during the Jim Crow era, he earned his bachelor’s degree in three years at Berea College in Kentucky in 1903. He earned his master’s degree at the University of Chicago in 1908. He earned his doctoral degree at Harvard University in 1912.

“To educate the Negro we must find out exactly what his background is, what he is today, what his possibilities are, and how to begin teaching him as he is and make him a better individual of the kind that he is,” he continued in his 1933 classic book, The Mis-Education of the Negro.

Stern, unflinching, and unsentimental about the harsh political realities that people of color encounter in daily life, Woodson launched the Association for the Study of African-American Life and History in 1915 in a three-story house he bought in Washington, D.C. He cleaned the building himself, and paid his staff in cash once a month.

“They must be taught to develop something for themselves,” he continued. “Can the Negro youth, mis-educated by persons who depreciate their efforts, learn to make opportunities for themselves? This is the real problem the Negro must solve; and he who is not interested in it and makes no effort to solve it is worthless in the present struggle.”

Peoples Perry said her journey from a public housing project to a leadership position with the local school system was fueled by adults who put a human face on the views that are in Woodson’s book. “Back then, every adult I came into contact with in the projects was concerned about me improving myself,” she said. “They never tried to make me feel inferior.

Our neighbors took care of us. I was motivated and encouraged by those around me. They would not allow us to fail.”

For this reason, after she became the principal of Campostella Elementary she hung a memorable sign on her wall: ‘Failure is not an option.’ She said, “Everybody, including the office staff, the custodians, and teachers saw the sign. Everybody believed our job was to make sure that our children did not fail. Our teachers walked the children to their classes. Later, they walked with them to their communities after school. We wanted to prove that we really cared. It proved to be the best thing we could do.”

During her tenure, Campostella Elementary regained its accreditation two years after she assumed office. The school building later was torn down, rebuilt from the ground up, renamed and reopened as The Southside STEM Academy at Campostella in the fall of 2016. It has not gained accreditation. For a school to earn full accreditation, students must achieve adjusted pass rates of at least 75 percent on English, reading and writing SOL tests, and at least 70 percent on assessments in mathematics, science and history.

“The challenge of educated leaders especially in Norfolk is to see the repercussions that an ineffective educational system has in our African-American community today,” Peoples Perry said. “To quote Langston Hughes: “I am somebody.’ My task is to love life, to love learning, to seek to improve myself through education, and to make a positive impact on communities. This means I want to give back, not take away.”

While Woodson, who is called the Father of Black History, never met Peoples Perry, look closely at their philosophy. In other words, do they think along the same lines? Woodson believed that the crisis in education would vanish if more educators would “forget most of the untried theories taught in school.” In plain terms, Woodson said, ”See through the propaganda that has been instilled into the mind under the pretext of education. . .If he (the educator) would fall in love with his own people and begin to sacrifice for their uplift—if the highly-educated Negro would do these things, he could solve some of the problems now confronting his race.”

A case in point is Peoples Perry’s own success story. Caring adults, concerned neighbors, and holistic-minded teachers transformed her life; although a trove of studies show that implicit racial bias, which Woodson zeroed in on decades ago, continues to be an obstacle for many people of color nationwide. For example, in a 2003 study researchers mailed out identical resumes with ethnic sounding names like Jamal and Caucasian-sounding name like Brendan. The same résumé was roughly 50 percent more likely to result in callback for an interview if it had a “white” name.

Meanwhile, a 2007 study asked subjects in a video-game simulation to shoot at people who were holding a gun. (Some were criminals; some were innocent bystanders.) African-Americans were shot at a higher rate, even those who were not holding guns.

Of the increasing number of studies that show implicit racial bias is, well, a fact–not a myth, Peoples Perry said, “I think many teachers do not believe they have any bias against children. The problem is not knowing you have it. It is not until they face adversity or a challenge and how they respond is how those biases come out. Just some of the words that the teacher uses, such as ‘these students’ automatically separates children.”

She told of a Caucasian male teacher who told her that the students he taught at Campostella Elementary “did not aspire to be anything more than what they already are.” Peoples Perry said, “I told him these children just need a teacher with a heart. He told me that sometimes he’d rather work at 7-11 than work here. I told him to come back to my office tomorrow. I went to 7-11 and got him an application. I told him I’d thought of what he’d said. So here is what I plan on doing.”

She continued, “I called my supervisor and told her, ‘Either he goes or I go.’ I told him I’d written him a great recommendation for a job at 7-11. I told him to fill out the application. I told him he could not work here anymore. Children see you better than you see yourself,” she explained. “They know you don’t like them by your actions and reactions. Children may scream and behave disrespectfully but you have to show them how to respect you. I believe everyone deserves respect: Teachers and students.”

In her new role (in her old neighborhood), she oversees a program that has already served about 100 students in grades K-6, during the past five months. Two hours a day, 10 teachers have helped students finish homework in a classroom setting. And the program has already provided an array of after-school enrichment classes including swimming, international studies, health and wellness, gaming, quilting, guest speakers and field trips.

Although Woodson passed away years ago, Peoples Perry’s early life and accomplished teaching career bring his convictions sharply into focus. In other words, she shows what can happen when a college graduate returns home and chooses to make a difference.