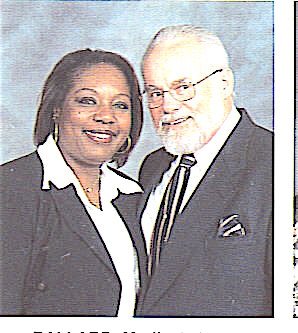 For some months, in 1987, Marlin Ballard had been giving subtle graphic and verbal hints that he had a crush on Velma Tyler Hardie.

Marlin was an Operations Supervisor, and Velma was the Office Supervisor, where her department processed payroll and employee’s concerns from supervisors, including Marlin, came across her desk.

At times there were “Post It Notes” from Ballard laced with compliments or warm greetings scribbled and attached to the documents.

After Ballard’s military service, he landed a job with Virginia Electric and Power Company, VEPCO, (now Dominion Energy). The couple worked more than 10 years at the energy company’s Portsmouth Power Station in Chesapeake before they began to generate romantic electricity for each other.

When Marlin visited Velma’s office, he would flash a warm smile and engage in light banter always sure to leave some flattering words in Velma’s ear. He was always very complimentary of her attire or hair style.

Velma Hardie knew a great deal about Ballard. She had access to his employee file which included stellar evaluations for work ethic, personal conduct, income, and other essential information revealing a stable and viable employee. She felt his personal life surely had to parallel his work ethics.

After many months of small conversations, Marlin let Velma know that as a divorced man he was tired of eating his meals alone.

Ballard had been married for 22 years and this union did not produce any children.

One day, he popped the question, “Will you go out for dinner with me?”

Velma accepted, but she knew Marlin would need to get the unanimous approval from her two sons, Tony, 19, and Sean, 15, and the family dog Dusty.

Hardie polled her two sons to determine their opinion about her going out to dinner with Ballard. Their responses were inconclusive until the third party had a say.

Dusty, who they believed was a great judge of character, would have to make the decision. If Dusty responded to Ballard positively, then it was okay, and if he didn’t, then dinner was off.

When Ballard arrived to pick up Hardie, Dusty was the greeter.

Ballard reached down to let Dusty sniff his hand and then gave a friendly pat on the dog’s head. Dusty rolled onto his back for a tummy rub.

The sons watched viciously, but eventually signaled a “thumbs up”. Hardie recalled both sons told “Mr. Marlin, you need to have our mother home by 11:00 p.m.”

That was more than 33 years ago, and the first of many memorable dates of dining out, movies or just conversations about getting to know each other, leading to a proposal and marriage.

After two years of dating and getting to know each other outside of the work environment, they married.

The warm and complimentary Ballard was different from former relationships Velma had experienced. Ballard’s first marriage had not created offspring, but his second marriage blended the Black family and White family and their respective traditions and connections.

Mr. and Mrs. Marlin and Velma Ballard are members of the growing families of interracial married couples. Over 15 percent of the nation’s marriages are mixed-race. Velma is among the 12 percent of Black women married to a White man.

The couple tied the knot some 20 years after the U.S. Supreme Court legalized interracial marriages in the Loving vs. Virginia case of 1967.

The Ballards point to the America’s increasing racial diversification, alongside the racial fears that promote racial purity for Whites and solidarity for Blacks.

The 2021 Black History Month Theme is “The Black Family: Representation, Identity, and Diversity.” The Black family is the microcosm of the entire race, and foundation of life and history.

Yet, families in the Black community are as diverse as the skin tones of the millions of people who are part of the global African diaspora.

Historically, the families may be patriarchal or matriarchal; single-headed or dual-headed; extended or nuclear; LGBT; Black; or interracial.

Velma Hardie is from Portsmouth, Virginia. Her father worked at the Norfolk Naval Shipyard and her mother was a domestic and nurturer to Hardie and her sister, Rosa Tucker.

Hardie is a product of the pre-desegregation era, I.C. Norcom High School Class of 1967.

Ballard was born and raised on a dairy farm near Syracuse, New York. At 16 years of age, his father moved the family to Florida.

One of six children and a 1962 graduate from high school in Florida which like the town was segregated. He enlisted in the Navy as a Machinist Mate for four years and with a 2-month extension, due to the Vietnam conflict, he was stationed aboard the USS Canberra based in Norfolk.

Velma Ballard said her new husband bonded well with her two sons, playing football, basketball, and other activities with Tony and Sean.

Sean, the youngest son, asked Marlin if it was okay for him to call him “Pops”.

After discussion on the issue, Marlin admitted he was not there to take the place of the boy’s biological dad, who was continually active in the children’s lives, but he said he would “be pleased to be his Pops.”

One day Tony overheard Sean referring to Marlin as Pops and he began to use the title, too.

Velma said her only exposure to white people had been the “friendly” family her mother worked for as a domestic. Although the area she grew up in Portsmouth butted up to a white community, Prentis Park, a division existed.

“You stayed on your side of the street,” she said.

The couple recalled the first time Velma was introduced to Marlin’s family. Ballard was born in a rural section of Syracuse, New York where he did not see many Black people. Therefore, he did not recall his parents showing any racial prejudice. His tenure in the military and

at Dominion Energy had exposed him to many diverse people and he had easily embraced the multi-cultural world around him. Still, he had no idea how his family would respond to Velma.

Marlin called and told his mother, “I am in a serious relationship and want to bring her home to meet the family. Oh,” and then Marlin said, “I want you to know she is a Black woman.”

“There were several seconds of silence…which seemed like forever,” Velma recalled before his mother said, ”Bring her home.”

The couple prepared mentally, not knowing what to expect. A backup plan called for them to spend a few days with the family and visit Disney World, giving the family time to digest their feelings.

“We arrived and things were very cordial,” Ballard recalled. “We spent two days with his family and then went to Disney World.” When they returned to his family’s home, his mother and younger sister, Mary, said they had no issues with their relationship.

For two older sisters, Evelyn and Joan, seeing the big grin on their bother’s face gave Velma a shoe in. She said Marlin’s brother “just treated me like family.”

In 1993 Marlin’s and Velma’s mothers both died.

“I loved her,” Velma said of her mother-in-law. “I felt her love. She introduced me as her daughter.”

When Hardie proposed the idea of her marrying a White man to her parents, Velma recalled her mother “folded her arms and said it was a decision she would have to make.”

Hardie’s sister, Rosa Tucker, was onboard with her relationship with Marlin and held conversations with their mother to get her to be open minded, too.

Velma said, “They both learned to love and understand why I had chosen Marlin to love.”

Today, the Ballards have a large “extended family” of friends they share from their respective Black and White worlds.

The couple made a pact: they would not engage “anyone who did not respect their marriage.”

They never said others “must like or agree to our relationship but ask that you respect what God has joined together.”

The couple is retired now.

After 33 years, their bond has inoculated them from the social slights and second looks they receive from African American and White people that still are not used to seeing a White man and Black woman walking hand

in hand in public.

“We still go on dates, and people look puzzled and we give them a smile,” she said

Velma recalled a night of dining, when a man stabbed himself in the face with his fork full of mashed potatoes when he saw them dining.

Marlin was affectionately rubbing her hand.

The Ballards love organic gardening and traveling. Two people can learn much on a road trip, they agree.

One memorable period of their marriage occurred when Velma was age 59 and working on her Doctorate in Educational Leadership.

It became a six-year journey for them both, and Dr. Velma Ballard says she is so blessed to have had her soulmate, Marlin, with her to make the journey enjoyable.

Follow us
In this article:Color-Blind, Feature, Featured, interracial Couple, love