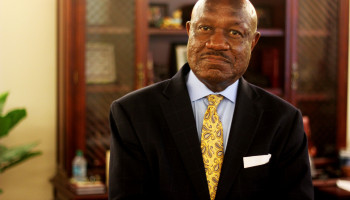 DAYTONA BEACH, FLA
A week after students at Bethune-Cookman University submitted a petition demanding the termination of President Edison Jackson, he recently announced plans to retire almost a year before his contract ends.

It is the second time students have recently called for the resignation of Jackson who became president in 2012. In May students demanded his termination after he invited U.S. Education Secretary Betsy DeVos to speak at commencement.

Hundreds of students stood and turned their backs in protest as DeVos delivered the commencement address, and while Jackson awarded DeVos an honorary doctorate. At the time, the Florida NAACP also called for Jackson’s termination, as well as that of Bethune’s board chairman Dr. Joe Petcock.

Johnson’s resignation also comes on the heels of recent reports by The Daytona Beach News-Journal which examined the university’s mounting financial challenges including increased operating losses from the financing of a new, 1,200 bed dorm, which was originally expected to cost $72.1 million but ultimately cost $85 million. The school’s credit rating was twice downgraded. By the time it finishes paying for the building, the college will have paid $306 million dollars for a project originally quoted at about $72 million.

For more than two years, a small group of alumni and former trustees raised questions about the dormitory’s cost. Financing for the new dorm is expected to cost the school more than $306 million over 40 years. According to The Daytona Beach News-Journal, the dorm deal is structured so that the school’s monthly payments will increase by 1.5 percent annually over the life of the lease from a low of $470,000 a month to a high of about $840,000 – or about $10 million a year.

Meanwhile, the school’s tax returns showed an $18 million operating loss from June 2105 – June 2016 – nearly 12 times the amount of the previous year. During the same period, salaries jumped from $8 million, forcing the school to borrow $7 million from its endowment, nearly 13 percent of the university’s total endowment.

Board members have not announced the terms or specific date for the retirement, according to news reports.