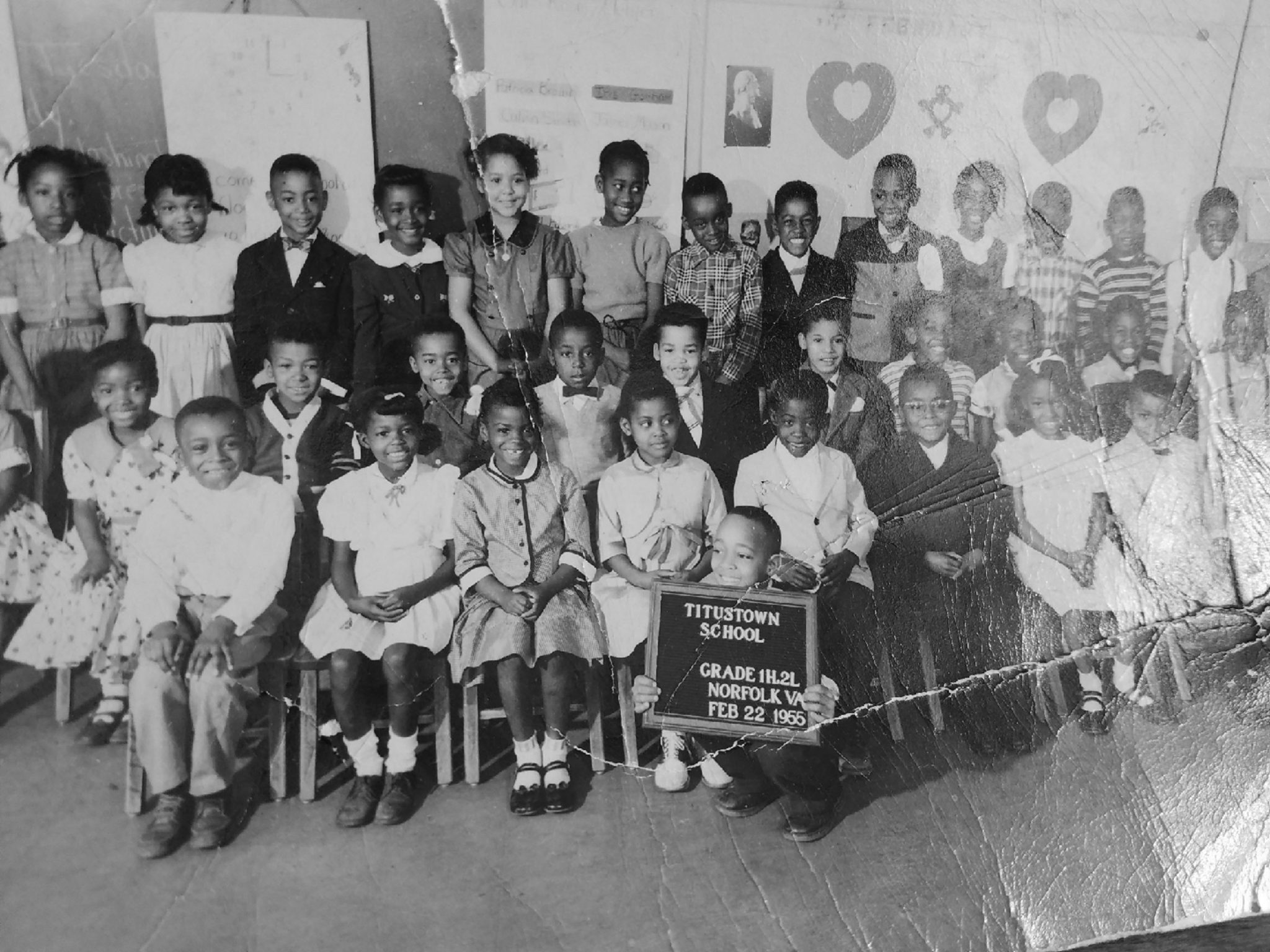 Many of us will travel to the four corners of the world to plant seeds which bear the fruits of family, fame, fortune or failure.

But regardless of how far and where those seeds are sown, our roots will rest in a place we call “home.”

There we reclaim the first sweet memories of family, childhood, love and friendships, or the salty tears caused by growth, indifference and discovery.

Come August 12, thousands will travel from afar or near, and gather on the hallowed ground of a recreation center to attend the 3rd annual Titustown-Bolling Brook Reunion.

The opening ceremony at the Titustown center and recreation field on Divan Street will happen at noon highlighted by a speech by Judge Stanley J. Osborne, a member of the Titustown Alumni.

This may be largest of the three gatherings, according to one of its organizers, Elaine Smith, who lives in Virginia Beach, but still calls Titustown “home.”

Smith’s family moved to Titustown from downtown Norfolk when the city acquired the land to build Tidewater Park in the early 1950s.

After she graduated from Norfolk State University, she left the area, but returned to Virginia Beach.

“Once you would (only) see people from Titustown at funerals,” she said. “Then we would get together and talk about old times and ask about this or that person.”

Then in 2001, thanks to Titustown Alum Bobby Johnson, a reunion was held.

But several years passed before Johnson, Mary Jenkins and Smith met and began organizing the reunion held three years ago.

In January of 2015 Smith said an organizational meeting was held at a local restaurant and 25 people showed up. The following August, the first reunion was held.

“Now we are getting more people from all over the country coming back,” said Smith. “They are bringing their children and grandchildren. There is food, games, and other fun, but the most important thing is people coming back home and seeing old friends, family and remembering our lives in Bolling Brook and Titustown.”

Eugene Rivers, Jr. said his parents, in an effort to stabilize their marriage, deposited him into his grandmother Lillie Webb’s home on Divan Street, when he was six-years-old.

He attended Titustown Elementary School and was a member of the last class of James Madison Middle School in Lambert’s Point in 1964, before he returned to Philly to live with his parents.

Rivers recalls that his granny was “very strict” on him. He spent many hours across Divan Street at the baseball field playing ball with the “Rusty Dusty” neighborhood baseball league.

Rivers said a unique personal feature or flaw could mark you for a nickname.

His was “Shotgun” because of the velocity in which he hurled a baseball.

He recalls when he eyed his grandmother standing in the yard with her hands on her hips, it was time for him to come home.

“You could see everybody in the community at church Sunday,” recalled Rivers, who served in the U.S. Army in Germany before a long career managing supermarkets in Philadelphia, where he lives now.

“I recall the Booker T. and other bands marching down the streets on holidays like the Fourth of July,” said Rivers. His mother, Virgie Rivers, turned 92 on July 30, and still lives in a retirement facility in their old neighborhood.

“The band would then stage a concert in the baseball field,” he said. “On Christmas, everybody got roller skates. And starting early in the morning, the kids would skate up Divan Street and onto the basketball court until 2 p.m. Then the adults would put on skates and roll around.

“Everybody was your mother and your father. I owe a lot the success in my life to that time I had there.”

Ada Blair lives in the same home on Filbert Street in Bolling Brook that she was born in 73 years ago. A close friend and cousin are the only two people from the community she knew as a child.

“The thing I remember most is the closeness…everybody was related to each other,” said Blair, who had five siblings. “This reunion is so important because it allows us to look back at our history where Black people owned their homes and were proud. There was respect for each other’s morals and the belief if you worked hard and got an education, you could do anything.”

The children in Bolling Brook walked past the all-White Granby Elementary and High School to attend nearby Titustown Elementary School or those further out.

She married a Navy man, left and then returned to a career in civil service and teaching. She is an SOL teaching instructor, and now is enjoying a busy retirement, volunteering weekly at a cancer center.

Phillip W. Brown’s father was in the U.S. Navy when the family arrived in Norfolk and moved into Carney Park public housing community on Meads Road when Brown was four-years-old. He lives in San Diego now.

Carney Park is gone now. It was a mix of military and civilian families, and he lived there until he was 18.

“I recall the community center where we hung out with friends and played sports and games,” he recalled. “Friday night was movie or dance night.”

The Brown family eventually moved out west, and he landed a job with a manufacturer.

“I have been to all of the reunions,” Brown said. “Titustown is still a part of me and I look forward to seeing all of my friends and part of my past.”

Brown, who is 66, said, “Titustown has undergone a renaissance. The old homes are gone but there are new ones.

“Wards Corner, where we shopped, has really changed. While many of the old families are gone, there are many new ones and it’s very diverse and that is a good thing.

“This is a very important event because young people get a chance to learn about our history and learn the trials and tribulations we endured,” said Brown. “Also, you can stay in contact with friends and family which formed who you are now.”

Now 70, Donald L. Lewis recalls his father was Senior Pastor, and his mother was the organist, at First Baptist Bolling Brook, when he was 13-years-old.

His family lived in the Villa Heights section of Norfolk, but each morning his parents and other neighbors attended church in Bolling Brook, where he eventually met his wife of 44 years, Caroline Bond Lewis, in 1973.

“I have family dating back to the Civil War in all of Hampton Roads and North Carolina,” said Lewis. “But I don’t stay in contact with them as much as I do with my extended family from Bolling Brook.

“The area was only about three streets and it seemed everybody was kin to each other,” said Lewis. “That’s not true now because so many people have left. But those people are still tight. This reunion is important because you have positive memories reborn; you meet old and new family and who has left. A reunion like this tells you that you should never lose your roots. They are very important.”

Bolling Brook is bordered by the 7000 block of Granby Street, Filbert Street to the south, Thole to the north and Waynes Creek to the east.

About a mile away along the north and south of the 1000-2000 blocks of West Little Creek Road sits Titustown. It is bordered by Terminal Blvd to the north, Shore Drive to the south, Divan Street to the west.

Both of the communities were parts of large tracts of acreage owned by Whites, where Blacks, dating back to slavery, lived and worked on plantations or later sharecropped across the northern stretch of the mElizabeth River onward to Ocean View and the naval base.

One of the first buildings in the Bolling Brook area was New Mt. Zion AME Church, which initially sat at Rushmore and Newport Avenue on land donated to Blacks by Minton Talbot, whose family owned hugemchunks of land in that stretch of the county.

Later it was moved to Seekel Street in Bolling Brook in 1924, by some of the original inhabitants of the settlement.