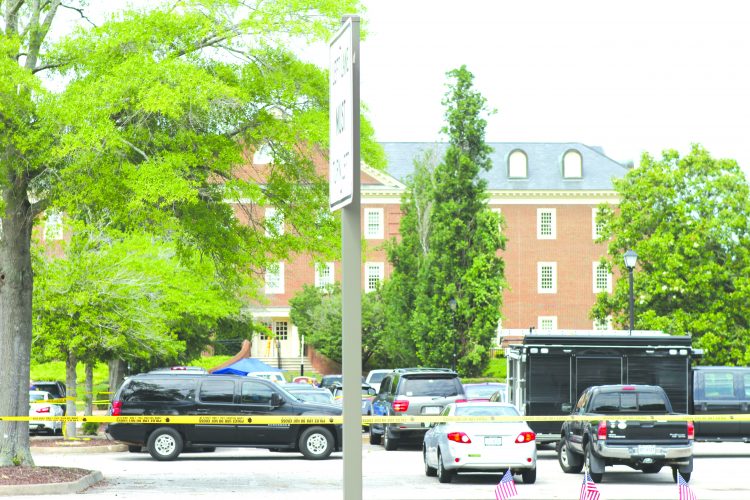 Within hours after e-mailing his bosses at the Virginia Beach Municipal Center that he was quitting, Dewayne Craddock, 40, went on a shooting rampage in the building where he had worked for 8 years as a public utilities engineer, leaving 11 dead and one soon to die. He himself was shot to death by police.

Today, some are calling the victims the Virginia Beach 12 and Police Chief Jim Cervera announced early on, his department would refer to Craddock by name only once, and thereafter as “the suspect.”

The residents of Virginia Beach, Virginia’s largest city, and its neighbors in the closely knit Hampton Roads cities nearby are shocked and grieving over what has been billed as the nation’s largest mass shooting in 2019.

To date, local, state and federal investigators have not defined Craddock’s reasons for his actions late Friday afternoon on May 31, as city workers readied to exit for the weekend.

As is a tradition now, some city officials and many outlets of the print and broadcast media are choosing to reveal the name of an assailant only once in such an incident. This is designed to halt any sensationalism and fame it is believed these people accrue in the aftermath.

Craddock is said to have submitted his resignation as a two-week notice. He was at work at some time during the day and even went to lunch before returning to building 2 where the killing spree took place. He entered the building using his security access badge.

According to a police report, the email said he was leaving because of personal reasons, noting, “It has been a pleasure to serve the City.”

Also, a Virginia Beach Police officer wearing a protective vest avoided injury as he responded to shootings in the building.

According to Virginia Beach Police investigators and officials from the Bureau of Alcohol, Tobacco and Firearms (ATF), two .45 caliber pistols were recovered at the scene. Both of them were legally bought in 2016 and 2018, respectively.

At his home, investigators found two other weapons. Police also recovered a sound suppressor/silencer and extended bullet clip at the scene after what police said was an extensive firefight with Craddock in Building 2 of the Municipal Complex.

The Virginia Beach 12 were the victims of the 148th incident involving a shooter in a public space thus far in 2019. Overall, this year, 149 people have been killed, 585 have been injured or wounded and two of the incidents have occurred in public schools.

Last year there were 323 such incidents where 387 people were killed and 1,274 peopled were injured.

Craddock died in an exchange of gunfire after barricading himself in an office in the complex. The police had to shoot their way into the space.

Unlike other mass shooters, Craddock left no recent Facebook postings of any political or racial issues he may have been wrestling with, according to police accounts. Police have not uncovered wordy treatises espousing any issues or anger toward his fellow employees, according to accounts by city officials.

Also, there were no indicators in his personnel file of misgivings in his dealings with the co-workers who survived the incident or those he killed, according to official reports as of Monday, June 3.

Dave Hansen, the Virginia Beach City Manager, said a review of Craddock’s personnel records indicated he was “in good standing with the department; there were no issues of discipline ongoing.”

But those rosy assessments were countered by the Saturday edition of a news article in the New York Post. According to the Post, Craddock had been facing disciplinary action for a fight at work.

Also, an unsubstantiated report to date in the New York Post said he had recently started showing serious behavioral problems and got into physical “scuffles” with other city workers.

However, what really was on Craddock’s mind is unknown when he went into the municipal building with two .45-caliber handguns, at least one of which was equipped with a sound suppressor – and both of which were purchased legally.

Craddock was known as quiet, introverted by his neighbors.

He was a Virginia Army National Guard veteran. He served for six years as an artillery cannon crew member. He was athletic with a body builder’s physique. He also had cameras in the windows of his house monitoring his cars.

The website for the Virginia Professional Engineers described Craddock, as a graduate of Old Dominion University with a bachelor’s degree in Civil Engineering. He graduated in 2002.

Dolans’ Virginia Business Observer, in a 2003 report, said that Craddock had joined a consulting firm called MSA, P.C. and was a project engineer.

Craddock was African-American, unlike many of the white men who have been involved in such deadly incidents in recent times.

Therefore, questions of any racial issues have created an undercurrent of questions about his motives. Three of the victims who were killed in the building he attacked were African American.

On Monday Morning June 3, as families of the 12 victims were making arrangements for funerals, a makeshift memorial with flowers, candles and American flags decorated the area near the utility works building which was closed.

Various memorial services have been planned and tributes are being posted regularly on Facebook by people all over the region asking for “prayers” for the victim’s families.

Many city workers did return to work Monday morning and there have been continuing accounts of people still crying and traumatized by the incident.

Follow us
In this article:Virginia Beach Shooting, Virginia Mass