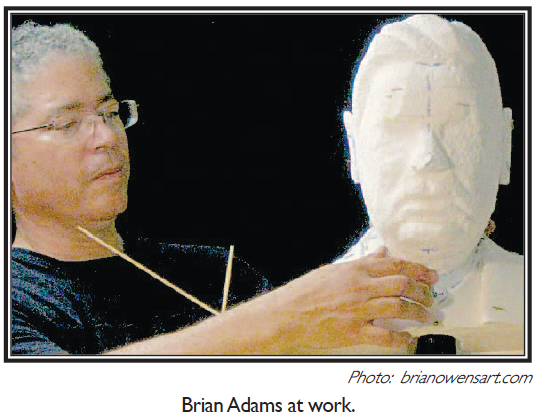 As Michelangelo had a habit of dragging and pushing a huge slab of marble into his studio and waiting for it to spring to life, the same seems to apply to Brian Owens, the sculptor and visual artist, who will design the Fort Monroe memorial that honors the first documented Africans who arrived at Virginia’s shores 400 years ago.
Owens, 61, is a Detroit native and engineer who lives in central Florida. Flip through Owen’s extensive portfolio. It’s as if Michelangelo is speaking.
Michelangelo once said, “Every block of stone has a statue inside it and it is the task of the sculptor to discover it.”
This is what Michelangelo did as he pounded and beat slabs of marble. Soon Moses, King David, and the Mother of Christ emerged as breathtaking masterpieces. The same applies to Owens, who has pounded and shaped bronze into images that immortalize many African-American trailblazers. His works are on display in many states including Michigan, Florida, and Missouri.
In Detroit, for example, is the bronze bust of the Rev. Dr. Charles G. Adams, pastor of the prominent Hartford Baptist Church, which celebrated its 100th anniversary in 2017. Aiming to become an economic force in the community, the historic church bought 5.5 acres and worked to attract and retain restaurants and retailers, including Long John Silvers, McDonald’s, Kentucky Fried Chicken, Subway, and Home Depot. The church also built a gated senior citizens community, according to news report.

And this is where that bronze bust of the pastor comes in. Owens created the bronze sculpture that rests on a dark green granite pedestal in the hallway that runs from the sanctuary to the chapel. It was dedicated on Founder’s Day on May 20, 2018.
Another example of Owen’s work is located in St. Louis. It is a captivating bronze statue of civil rights attorney Frankie Muse Freeman, who seems to be striding into the future.
History shows Freeman was a trailblazer. Born in segregated Danville, Va., Freeman spent her life making history before she passed at age 101 on Jan. 12, 2018 in St. Louis.
Freeman was the first women appointed to the U.S. Commission on Civil Rights, where she served for 16 years. Her first trip was to Mississippi to investigate the bombing of four African-American churches. In 1982, Freeman helped form a bipartisan Citizens Commission on Civil Rights to monitor the federal government’s enforcement of laws barring discrimination. She was a practicing attorney for more than 50 years.
In 2007, her footsteps were added to the International Civil Rights Walk of Fame at the Martin Luther King Jr. National Historic Site.
Freeman, who was married for 52 years until her husband passed in 1991, said she meant to impact segregation. It was not an accident.
“My commitment was to work for elimination of discrimination,” Mrs. Freeman told the Post-Dispatch in 1988. “I could not accept the segregation that existed while I was growing up,” she said.
The famous Detroit pastor and the results-getting St. Louis lawyer are only a few of the bronze sculptures Owens has created and installed through the years. He was chosen from four finalists who competed to complete the African Landing Memorial project. Gov. Ralph Northam announced his name at the recent commemoration ceremonies at Fort Monroe.
Northam allocated $500,000 from his fiscal 2019 budget to fund the project, an idea conceived by the non-profit Project 1619. The memorial will be located near the state’s marker designating the arrival on Fenwick Road.
“Art is not something I do, it’s who I am,” Owens said. “I didn’t choose to be an artist, it chose me.”
Owens was born in Detroit in 1958 to Katherine J. Owens, an educator and Carl C. Owens, a freelance illustrator and staff artist for the Detroit Board of Education, according to his website. He held his first two-man exhibit at the age of 16 at a Detroit gallery.
Owen’s portfolio includes other historical figures and events including the St. Augustine Foot Soldiers Monument, which was unveiled in 2011 in the Plaza de la Constitucion in St. Augustine, Fla. The monument honors the Freedom Riders who in 1961 began riding into Southern cities to challenge segregation on interstate travel via bus and rail.
Another one of his metal sculptures, “We the People” is a tall set of liberty scales. It was unveiled at Michigan State University College of Law on March 14, 2018.
As a sculptor, Owens stays busy. Or this is how Michelangelo, who also produced a prodigious body of work in his lifetime, put it, “Lord, grant that I may always desire more than I can accomplish.”