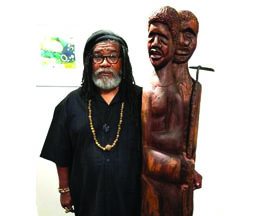 Artists discover their creative being at different ages, different times, in their lives. There can be myriad internal and external influences that ignite such a magnificent creative fire. For prolific sculptor Alexis Joyner, the journey began as a 6-year-old first grader. “I used the aluminum foil from the bag lunches,” he said, “to make dinosaurs, etc.” No doubt lunchtime was also a time to be spiritually-fed. Since those very early days of creative exploration, Joyner has sought to nurture his art along with a fervent spirit.

“I see making art as a spiritual act,” he said. “I am an instrument. It is my hope that I am receptive enough to receive and communicate what I am inspired to create.” Joyner was born in rural Southampton County, VA. As a young child, he was known to be inquisitive, quiet, precocious and a bit mischievous. But there was always his art. “I never thought of doing anything else but making art. I didn’t know exactly what being an artist was about,” he said. “But I knew that I wanted to continue making art.”

For young Joyner, it was an experience that he would be unable to avoid. His youth would be chiefly defined by the pastoral influences of the lush countryside. When queried on his romance with sculpture, Joyner said, “I think it has something to do with me being drawn to form. I marveled at root formations and trees and something as simple as sweet potatoes. When we pulled them up from the ground, I was fascinated by the different shapes and forms.”

But there were other major influences. “I had older cousins who were interested in art, but my mother,” he said, “was my biggest influence. She was a seamstress. This lady could look at a picture in a magazine and make the garment to perfection.” His mother’s pursuit of excellence fired Joyner’s own passionate adventure in the arts. But he worked in several genres and disciplines before sculpture beckoned with distinctive clarity, summoning forth a voice that would at once nurture his creative voice and his spirit.

“I have explored several mediums, for example drawing, printmaking, painting, and photography,” Joyner said. “I am drawn to the tactile quality of sculpture,” he said. “I enjoy the process of thinking in the round. The activity of handling form is both rewarding and challenging.” He has sculpted in various forms, clay, stone, metal and wood. “Clay might be my first love,” he said, “but wood speaks to me in a different way. It is as if wood is given a new life when it is shaped and sculpted.”

Sometimes, Joyner approaches a piece of wood with a vision in mind. Sometimes, he will sit in silent contemplation and watch, until the wood speaks to him. “This process works both ways for me. More often than that though, I tend to study the piece of wood and let it suggest what it wants to be.” But it’s not always smooth going. “Wood is a challenging medium,” Joyner said. “The subtractive approach to sculpture in itself is another thing altogether. It is a one way process. This is why many artists,” he added, “tend to shy away from carving. Wood does not yield its form without a fight. I find this resistance quite intriguing.”

As does he find teaching a compelling art form. Joyner taught for 37 years, including 10 years in the Isle of Wight public school system, before retiring last year as the Chairman of the Art Department and Director of the University Gallery at Elizabeth City State University. “The most rewarding thing about teaching to me,” he said, “is helping the student become aware of their own voice.”

Whether creating art or teaching it, Joyner is the consummate visual messenger. “Delivering a message is very important to me,” he said, “especially to young people, in general, and to young African-Americans in particular.” It was at ECSU that Joyner met his wife Robin. They have been married for 25 years and she too is retired. They have three children: Jameel, who recently earned a Masters degree; Tarsha, a Maryland physician, and Chenay, a teacher.

If you want to get a first-hand look at the magic Alexis Joyner sculpts from wood, you can see him in an exhibit entitled “Cold Sculpting,” with painter Eloise Shelton Wood. It will be at Norfolk State University, 700 Park Avenue, through September 23, in the James Wise Gallery, Hamm Fine Arts Building. The gallery hours are daily from 10 a.m. to 4 p.m. Joyner is pictured here with his work “African-American Gothic.” He describes it as “a spoof of Grant Woods.” Also pictured is one of his favorites, “Wellspring. It represents mother Africa,” he said, “the place where mankind began.” It is a mixed-media work, crafted from black walnut, adorned with a galvanized bucket, sand and a cowrie shell. If you make it to the exhibit, be prepared. You may feel something move deeply within your spirit. “I have referred to some of my works as visual sermonettes,” Joyner said.