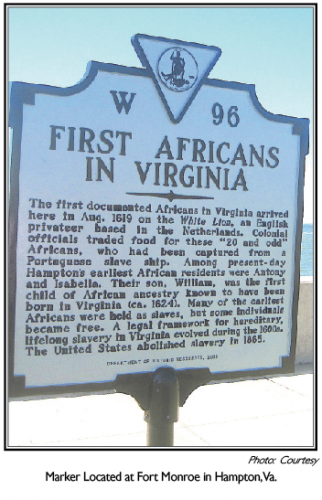 Beginning in 1619 with the arrival of “20 and odd Negroes” aboard the English ship White Lion and about three-to-four people aboard the Treasurer, a vessel owned by the Virginia Company of London, people of African descent became a permanent cultural and political fixture in America.

For the first century, the vast majority of the Africans were taken from Central and West Africa and were subjected to a kind of forced acculturation that accompanied their enslavement. Yet, Africans adapted and infused America’s evolving customs with art, music, religious, and culinary practices, trading systems, agricultural and architectural techniques, and language that became the foundation of an emerging American culture.

While small in number, these first-generation Africans helped define even the concepts of freedom and liberty with their efforts to gain freedom. Nevertheless, their efforts failed as Virginia developed a legalized system of slavery beginning in the 1640s. Thus, 1619 marks the beginning of race-based bondage that defined the African-American experience.

When George Yeardley was elected as the new governor of Virginia in 1619, his primary goal was to provide for the extension of an Englishman’s rights to all colonial property holders. Yeardley quickly established the first representative government in the New World and scheduled annual meetings in which laws and rules based on popular will were formulated.

The first meeting of this limited representative government occurred on July 30, 1619. Made up of twenty-two men with two representing each of Virginia’s eleven “plantations” or counties, the new government established civil law and created the beginnings of limited democracy that eventually established new social and economic institutions, such as Virginia’s undemocratic slave-labor workforce. Later renamed the Virginia House of Burgesses, this body was responsible for limiting the rights of those it did not consider citizens of the colony.

What is ironic is that within a month after the burgeoning colony celebrated the beginnings of democracy for privileged white men, the arrival of approximately 32 kidnapped West Central Africans to the Virginia colony in late August 1619 demonstrated how the definitions of equality and citizenship contracted rather than expanded when it came to people of color. Indeed, from the outset, Africans occupied “a singularly debased status in the eyes of white Virginians,” according to historian Alden T. Vaughan in his essay, “Blacks in Virginia.”

Within a few decades, this debased status devolved into permanent and inheritable bondage, and Africans in America would never experience equality, regardless of their accomplishments or economic status.

Yet, they refused to accept dehumanization, slavery, and disfranchisement without a fight. The American historical landscape was replete with efforts by Africans in America to force the nation to face its historic inequity and later its hypocrisy about its national standard of democracy, freedom, and liberty.

By the Civil War period, African-Americans had begun making substantial progress in bending the nation toward social justice, resulting in the passage of the Thirteenth, Fourteenth, and Fifteenth Amendments. Within a decade, however, the nation regressed with laws that culminated in the 1896 Plessy v. Ferguson decision. By 1920, the arc of justice was pushed forward again with the ratification of the Nineteenth Amendment as citizenship was extended to women. Not until the 1957 Civil Rights Act, the 1964 Civil Rights Act, and the 1965 Voting Rights Act did this arc of justice move the nation closer to its promise of freedom, liberty, and equality.

What is most important for every American to know is that promises of democracy are only promises unless the people demand that those promises apply to them through advocacy, voting, and civil action.

From the outset, the activism of Africans in America framed the broader meaning of civil rights and opportunity in America and were the originators of resistance to enslavement and oppression. This struggle defined the American experience and the nation’s character as a place of opportunity.

The year 2019 marks the 400th anniversary of the forced arrival of the first documented Africans in the Virginia colony, America’s first colony and the birthplace of our nation. As we reflect on this anniversary, I am reminded of the important question raised in a 1970 Time magazine article by acclaimed writer Ralph Ellison: What would America be without African-Americans?

Dr. Cassandra L. Newby-Alexander is a Committee Co-Chair of the AMERICAN EVOLUTION/ 2019 Commemoration, Dean, College of Liberal Arts at NSU, and the Director of the Joseph Jenkins Roberts Center for African Diaspora Studies at NSU.and Restoration Society, Inc., and O. I. C. of the United States Colored Troops Descendants. Fort Monroe in Hampton, Va., is recognized as the official landing site.

Follow us
In this article:400-Year Odyssey, Africans In America, Colonizing, Colony, Slavery, The Beginning 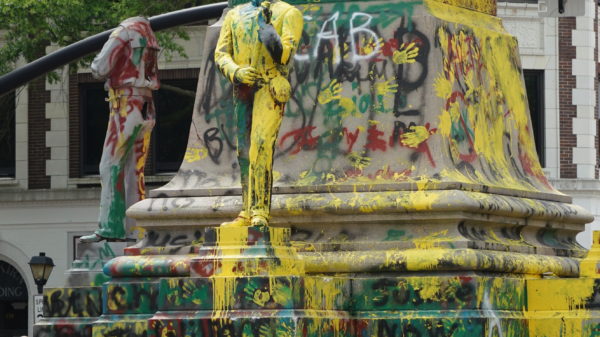 From the days of Slavery, Black Power and Passive Resistance It’s Still About Economic Development, Not Burning America Down By Bill Thomas Daniel Watts,...