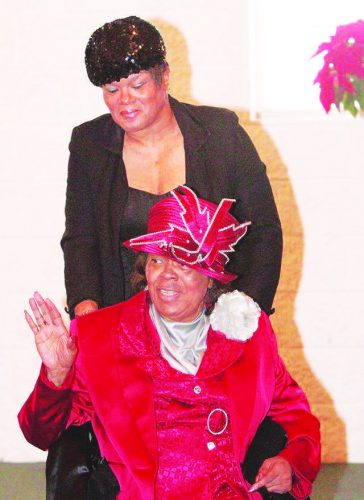 Mother Mayrose was born on June 15, 1935; she was named after her father’s sister. It appeared that the first four out of the eight offsprings of late the Walter L. and Hattie M. Goodman were named after descendants of my grandparents. Betty, Walter and Eunice were all family names. Betty transitioned in February 1992 and Eunice in May 2010. Those two were exceptional sisters. Mayrose was marked by her father to be a great sister. She has four younger siblings, Arlonia, Marchetta, Thaddious and Veora.

Mother was very smart and was skipped a few grades while in elementary school. She attended the Norfolk County School System. Later she became a student of Psychology at Tidewater Community College, Interior Decorating at Old Dominion University and graduated in 1979 from Norfolk State College along with her two children Michael and Vernell. She was a clothing designer with her own label and a gifted wedding and event planner. She served as a Steward in the AME Church and as an Evangelist to the world.

When she was young, she volunteered for kitchen duty. At the age of 5, she assisted her mother with cooking family meals. She had to stand on a foot stool. She told me that it gave her hands-on sampling of the daily meals. She still loves to eat.

In 1951, she was swept off her feet by a gentleman from Crestwood, James, Sr. (aka) Pig Jones, my father. She met him at a school dance and, of course, it didn’t sit well with my grandparents. Their eyes embraced and by January 20, 1952, they were married by the then Pastor of New Mount Olive, AME Church. At the age of 23, she was a mother to four biological children.

The testimony to this story is, she was told after the first birth that she would not be able to deliver another child. So, you are looking at a miracle. It was a struggle but through it all she survived and birthed three additional children, James, Michael and Glenda. The complete story will be told in my book entitled “Third Miracle.”

Our sister, Vernell transitioned into eternal rest in 1995, from renal kidney failure. This was very painful for Mother and the entire family. Yet, today, we are revisiting this painful nightmare. On August 9, 2016, we received a call that her oldest son The Rev. James E. Murray, Jr. had a stroke in Cleveland, Oh. This news was difficult. But it was real. The Lord allowed what was not supposed to be to exist and that includes myself. The struggle is real.

Twenty-one years ago, Mother Mayrose had a sudden stroke. As an employee of the Christian Broadcasting Network, 700 Club, she was covered in prayer. I was able to catch the stroke in time and laid at her feet at Chesapeake General Hospital night and day. For 21 years, I have been with her. We became not just mother and daughter, but we became spiritual partners in ministry. We have traveled together. Such an encourager. She would say to me as Jesus’ mother said to him, “Girl, you better get up and do something.” I haven’t had the chance to take her to Paris, France, a place she has longed to travel.

On May 4th, 2018, the certainty of her life span was undetermined due to the revisit of my sister Vernell’s condition, accurate renal kidney failure. Yet, she has a peaceful unassuming spirit and remains a woman of faith.

Having to grip with the fact that the possibility that 2018 may be our last Mother’s Day together is hard. Yet, I must consider that there are many who have been challenged with not having their mother.

Mother, we love you and thank you for all that you have put into our lives. We promise you that we will keep the legacy of your love true to our hearts. We will meet your spirit in Cleveland, Oh., and in Paris, France.

Don’t you worry about us, because in the day of your departure, we know that peace will be still. You pushed us out and we were able to push you around when you became wheelchair bound.

From all of us we salute you.