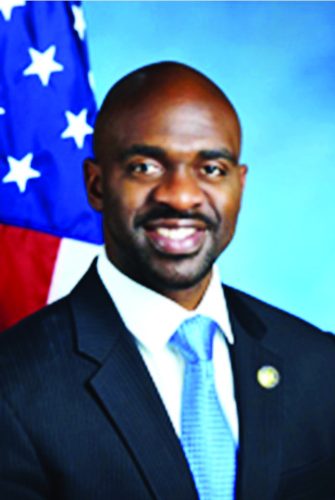 With the resounding Democratic victories of last November’s Virginia elections, why would I choose to write a story about a humble State Assemblyman from New York’s 79th District, The Bronx? The reasons are many. For starters, he won his 2016 election with more than 98 percent of the vote.

A magnificently diverse New York borough, the Bronx, arguably, reflects the nation’s demographic destiny. A 2013 Census Bureau estimate identifies the Bronx as the most ethnically diverse area in the country. For example, if any two residents were selected at random, there is an 89.7 percent likelihood they would be of different races or ethnicities.

That alone is enough of a compelling reason to write this story. But then, of course, there is the Assemblyman himself, Michael Alexander Blake, a Bronxite with the political mettle to get things done.

I had the occasion to see Blake speak last October at a political gathering in Virginia Beach. He spoke with distinctive clarity, passion, resolve, and luster; his energy infectious, invigorating. I thought this must have been what a young community activist named Barack Obama was like. Yet, make no mistake. Blake, 35, appears to be on his own stellar ascent. That’s why you need to know him.

Like many of his Bronx brethren, Blake is the son of immigrants. His parents immigrated from Jamaica and though neither had any burning political aspirations, they named their son for two Jamaican prime ministers: Michael Manley and Alexander Bustamante.

An impassioned unionist who often railed against colonial rule, Bustamante frequently defended the rights of striking workers who were chiefly African and mixed-raced. For his efforts, he was imprisoned from 1940 to 1943. Yet, his perseverance and popularity would prevail. When Jamaica won its independence in 1962, he would become its first prime minister, serving until 1967.

Initially, Manley refused to enter the political arena. He had come from a famously wealthy family and his father was elected premier of the British Colony in 1955. But Manley avoided politics, shunning the appearance of privilege and advantage. However, fate would not be denied. In 1962, he was appointed to a Senate seat in the Parliament of Jamaica. He won an election to the Jamaican House of Representatives in 1967 and in 1972 became the 4th Jamaican Prime Minister, serving until 1980. He was re-elected in 1989 and served until 1992.

Blake notes, “When you’re an immigrant or a child of an immigrant, you understand that, in large part, your livelihood is directly and substantively impacted by those who are elected. Michael Manley and Alexander Bustamante were almost larger than life in Jamaica and so to be able to be connected to them is and always was a blessing.”

It was likely his vibrant, multi-hued community that compelled Blake to adopt an attitude of service. Early in his career, he worked with such groups as Green for All and Operation HOPE. The former pursues a clean environment as a platform to provide jobs and opportunities for people of color and the latter works to provide financial literacy, capacity, dignity and empowerment. There is remarkable synergy between the vision of each group and there is no surprise that Blake would gravitate to both.

“I have a passion for service,” Blake says, “whether it be at my church… where I’ve been preaching for years, whether in the lay ministry, whether it is volunteering in the community to mentor young people and young men. All these pieces were just a part of that puzzle.”

Later, Blake found himself serving as the Iowa Political Director for Obama’s 2008 presidential bid. After his candidate made history, the hard-working activist served in his administration as Associate Director of Public Engagement and Deputy Associate Director of the Office of Intergovernmental Affairs.

During Mr. Obama’s 2012 re-election campaign, he was the National Deputy Director, Operation Vote. Currently, he serves as a Vice-Chair of the Democratic National Committee, another reason I wanted to interview him, on the importance of his role.

“In large part, the effort is to be a part of a team that engages communities of color and millennials all across the country. I help to train candidates, recruit candidates, and speak at events. At the end of the day, our job is to get as many Democratic candidates elected as possible … electing people from the school board to the Oval Office.”

He reflected on the incendiary dialogue engulfing the Deferred Action for Childhood Arrivals, DACA, program to further illustrate. “For the community that is wondering if they are going to be deported from the only real country they have known as their home, it’s irrelevant to them if you are a D or an R, as long as you help them.” He pauses, then adds, “I think that it’s the same for politicians right now. I think that the magnitude of the issues is forcing well-meaning, good intention people to come together and really have a conversation. The challenges that people are facing right now are exactly what can bring politicians together, to say, ‘It’s not about petty politics. It’s about actually making progress.’”

So what impact does Blake feel the tempestuous Trump tweets have on this pursuit of progress?

“I think his tweets are definitely concerting because they can be taken as the words of the President, the leader of the free world. You have to see them as the vision and the stances of the president and how that then gets implemented and interpreted. We are in an environment where the tweets and your social media presence does speak for you and in order for us to be respected and seen as a true global leader, we need less tweeting and more leading.”

I wanted to delve deeper into his impressions of Trump, especially in the wake of his inflammatory attributions to Haiti and African countries as foul repositories of fecal matter. I asked flat out, ‘Is Donald Trump a racist?’ There was a momentary pause, then he uttered a response, resounding with great conviction. It was a simple, profound and unapologetic, “Yes.”
I was done but offered Assemblyman Blake the opportunity to summarize. As he began to respond, a siren wailed in the background. He proceeded undeterred.

“With this being the 50th anniversary of the King assassination and Bobby Kennedy’s assassination, for me to be a young Black man, son of Jamaican immigrants, who gets a chance to represent my community and the legislature and gets to represent the Democratic Party nationally, it’s a blessing, to show that it is still possible to dream.”

In the wake of such heartfelt reflection, the siren trailed off into oblivion, perhaps heralding the fate of Trump’s divisive, disruptive rhetoric.