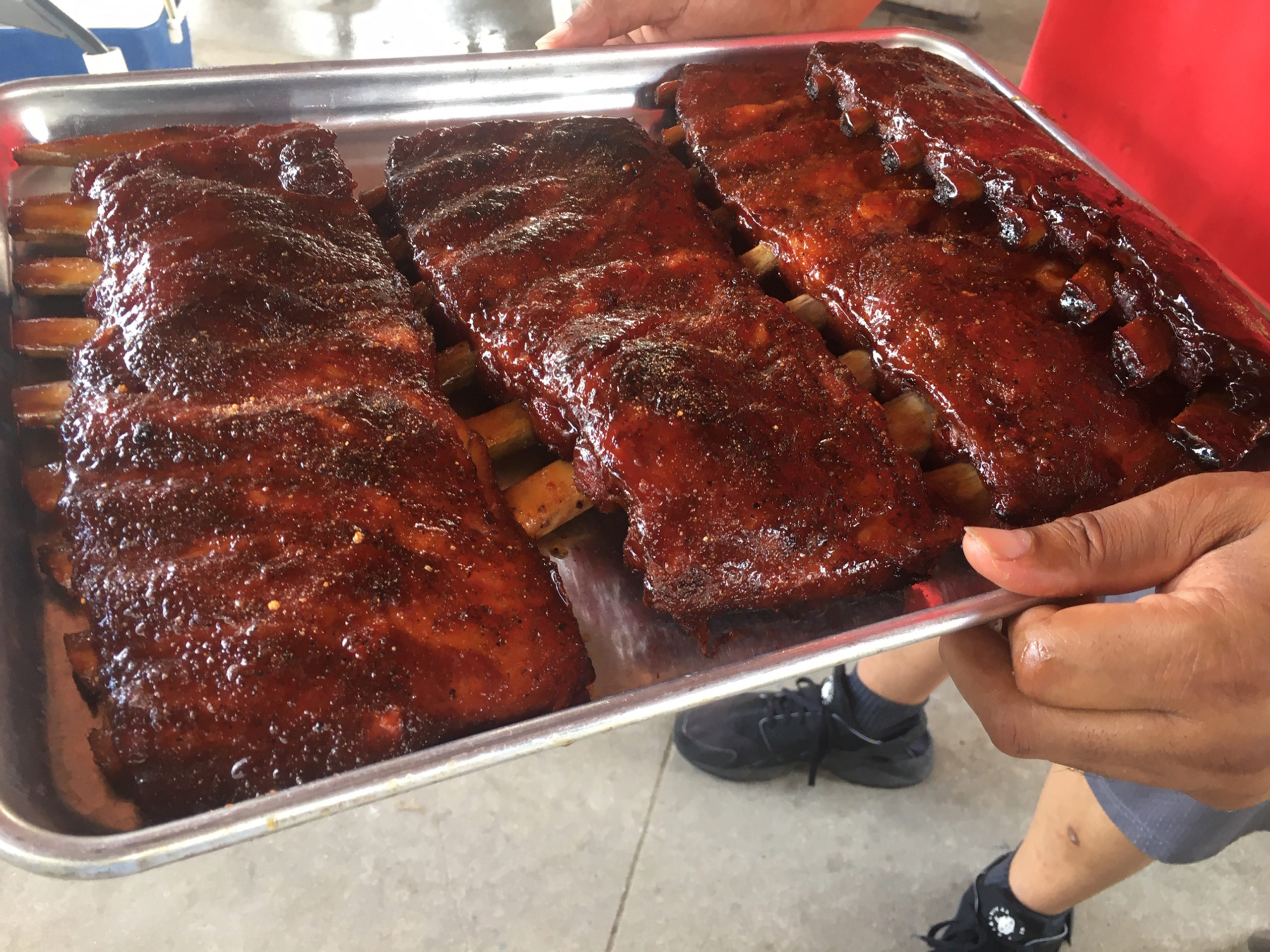 CHESAPEAKE
The location was on a “need to know basis”.

Upon venturing through the gates of the spacious backyard from a cook and griller’s dream, one was mesmerized. There was every barbecue grill you can imagine, socially distanced placed, from the basic cider block with thick steel grill rack to the NFL-themed sophisticated smoker.

They had on black gloves! A subliminal message?

After brief introductions, and quietly observing a clean and sanitary prep the Guide’s culinary correspondent was glad to have accepted the invitation to the first rehearsal “barbecue” of Coastal Virginia’s newest competition barbecue Pit-master team to represent Coastal Virginia.

They all showed up with their own pride and their own brands. All are award winners of some pit masters barbecue contests.

It wasn’t a battle of BBQ pit masters. It was more a collaborative team-up origin of a nouveau Coastal Virginia barbecue team that’s about to take the region by storm. Team 4KQ are expert barbecuing expatriates in Stan Battle from Atlanta, GA; “Cowboy Dan” Pringle of Houston, TX; Laron Saxby who hails from Walterboro SC and then there’s Norfolk’s own pit master judge Edward Kirby.

The Navy careers of three of the pit masters brought them here. Battle is a retired Chief. He now owns Blazin’ Goats Barbecue and Catering, and is the host and producer of “Friday Night Smoke” on YouTube. Retired Navy veteran Laron Saxby is president and “Executive Chef” of Saxby’s Smoke House Barbeque and Catering. When he isn’t on deployment “Cowboy Dan” Pringle is president and CEO of Texas Boy Barbecue and Catering. Edward Kirby of KIRBBQ is retired Army and an EEO specialist who grew up in Norfolk’s Park Place community. Kirby can be found on his popular YouTube channel cooking show that airs twice a week (new uploads on Wednesday and Saturdays). No matter their point of origin as a bono fide foodie I’m glad they call Virginia home.

“I started Blazin’ Goats when I retired two years ago,” said Battle. “Since then I’ve done the Hampton Roads Morning Show a couple of times. My ‘cue has been featured at Rib-tober Fest, Boardwalk Art Show and Hampton’s Children Festival. I can’t even name them all. I’ve been on the festival and brewing circuit and, I’ve done a lot of corporate stuff: Holly-Davidson, Home Depot.

These brothers can wail on some meat. Each a true pit masters in his own right.

Battle said he started cooking on a grill when he was eight years old.

“My grandmother was an executive chef at the Marriott. My mother and father met in the kitchen. My father was a big barbecue guy. He even built his own cinder block pit. Our backyard was the common ground for everybody because it was a safe haven and we were throwing parties and barbecuing.

“When I was in the military I finished my Advance Culinary degree out of Stafford (University). I was a Yeoman, an administrator in the Navy,” said Battle. “My style is a little Kansas City and a some Memphis style, the barbecue regions I have studied. In Georgia we just cook good barbecue.

“I was raised around barbecue pits between my grand dads, my dad and uncles. Whether it was in the ground or cinder block they were always cooking or smoking something. I actually put my first piece of meat on a spit after helping them prepare the meat, and they thought I was ready,” said Battle, hustling to make sure the cooking area remained spotless. “A family tradition grew into a passion.”

If the charismatic Battle is the spirit of the team then Kirby is the master technician. His skills with a knife shear artistry.

“I started barbecuing competitively in 2013. That’s when I started seriously competing in competitions,” said Kirby. “I started out watching the BBQ Pit Master television series on cable TV. I watched it so much, and started trying some of the things they were doing just on the stove. Around 2006 I started on the grill after my wife, Joanne, bought me my first Charbroil Offset smoker. Up until then all we cooked in Park Place was hot dogs and hamburgers.

The BBQ showcase was hosted by Battle of Blazing Goat BBQ.

Saxby said he got his first opportunity to cook at 11.

“I’ve been around barbecue pits my entire life. The only time I wasn’t was when I was college. I was 21 or 22 when I first cooked on my one on my own,” said Saxby. “Like Stan did I started with family down in the low country. I know how to make ‘hash.’ What do you know about hash (a low country culturally-rich specialty that no native Carolinian will give you. And it’s not corned beef hash or has potatoes either)?”

Cowboy Dan, the wrangler hunting enthusiast with his huge, traveling smoking trailer called The Beast of the East, can hold his own with the best of them, elected to be the sous chef to learn how to work with his new teammates.

Cassius Fisher is the 4KQ videographer and documentarian.

“The Navy wanted me to concentrate on presentation,” said the award winning retired Navy, Culinary Special Senior Chief, a graduate of the Culinary Institute of America with a concentration in Finishing Courses.

Dr. Howard Conyers, an author, food historian and PBS documentarian, who was on a panel I was covering at Smoke On the River at the immensely popular Fire, Flour & Fork food festival in Richmond lamented that Virginia had lost its historic barbecue way. For the last few years Conyers has been working to compile oral histories from African-American whole-animal pit masters across the South and tracing the traditional methods of “roasting hogs and other animals over pits in the ground.”

“Between Native Americans and the African-Diaspora of Virginia there would be no barbecue down south or out west. It all started in Jamestown over 400 years ago.

“Barbecue in America started with the whole animal,” said Conyers, a NASA engineer by day and food and barbecue historian by night. “Particularly with whole hogs, in Virginia then it went south with Black hands! You don’t have barbecue in this country without enslaved Africans who perfected it and shared it with sharecroppers . The likely route being North Carolina, Georgia, Louisiana, Alabama then Texas. Then ambled up to Kansas City.”

So, ironically, this weekend it was new Virginia residents from Texas, South Carolina, Georgia, Atlanta and a Norfolk native born in Virginia putting together a showcase barbecue team.

“We push slab by the pound,” remarked Cowboy Dan, tabling ideas to build the 4 KQ brand. “I think I’ll put that on the back of some of our tee shirts. “We got them SLABS!”

Now, to protein matters sans the imported alligator. Read: personally I’m not fond of eating reptiles but the “Cajun Gator” stuffed with Boudin Dressing (stuffing for us city folk) was cooked and seasoned perfectly from what I observed, and those who did eat it enjoyed it. The beef brisket melted in your mouth. The smoked chicken was the rage, falling off the bone al dente with tantalizing, balanced seasoning. Watch out (Feather N’ Fin)! Now, that beef brisket. That beef brisket was awesome! Can’t wait for the Texas Boy Barbecue version to return, though. The Baby-back & St. Louis ribs were utterly fantastic and the pulled pork (butt), in a word, was sublime!

Team 757 4KQ is ready for competition.

To place an order or to find the next time the pit masters will have great smoked meats for sale follow them on social media @ 4KQ.

“We Got Dem Slabs” says their slogan.