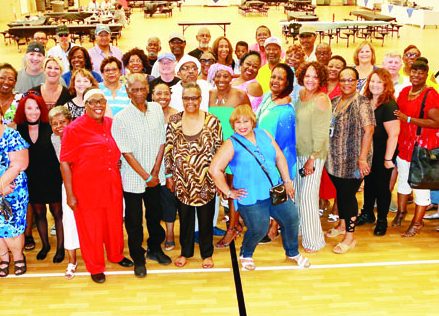 NORFOLK
The Norfolk Assembly Plant (NAP) and United Auto Workers (UAW) came together on July 1, 2017 for their first reunion since the Ford manufacturing plant closed its doors on June 28, 2007. The event occurred at the Campostella STEM Academy.

It would be fitting that the reunion take place at the new Southside STEM School which is located on Campostella and Indian River Road, suggested Norfolk Mayor Kenneth Alexander on first hearing of the planned reunion. And so it was. After all, the Norfolk Ford Assembly Plant provided jobs for area residents and a revenue stream for Norfolk for 80 years. It was located right down the street from the new school, first opening its doors in 1925 to its closing 10 years ago. It employed more than 2,500 people.

After two months of planning, it all came together the first Saturday in July with the support of our sponsor friends at the New Journal and Guide (Brenda Andrews), Cavalier Ford, Beach Ford, NAE Federal Credit Union and the City of Norfolk. We also thank our supporters: Jerry’s Restaurant & Lounge (catering & after-party), Lowery’s Video & Photography, Wicker’s Crab Pot, Africanna 2017, and Southside STEM School, including the Saturday work team.

Many phone calls, text messages and Facebook posts since then have confirmed the satisfaction of the attending co-workers and friends who showed up for the reunion. We had more than 20 Ford-related door prizes. (You should have seen the happy faces strutting up to receive their gifts.)

The majority of the combined supervisors and hourly co-workers had long retired from NAP but stayed in touch. There were people who came from as far as Kansas City, MO, Danville, VA and as close as Suffolk, VA.

The end result was everyone had a wonderful time, and all are looking forward to the next reunion event … possibly in five years. Prayerfully, next time more people will attend which was the biggest question mark on July 1st.

The word for today;
Evaluate,
Check it use it.